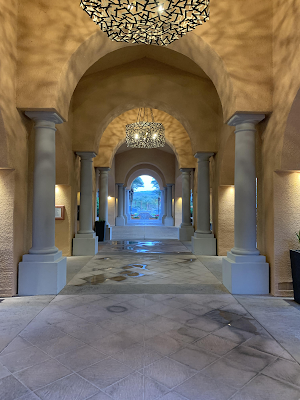 Westin Hills in Palm Springs is the perfect resort in March, even if you don’t golf. The pools, sunshine, water falls, the Ranch style architecture and perfectly kept grounds all to be enjoyed at 70-80 degrees make for a relaxing escape. I had just finished enjoying a reception talking with colleagues about the conference from today. There was an open bar, where I discovered that you can ask for a virgin Madras and you get a delicious concoction (it’s just orange juice and cranberry juice mixed). While we talked and drank, waiters walked the room with trays of pitas with hummus, fried cheese and dip, little quesadillas, coconut shrimp and crab cakes. But as the night was drawing to a close, I had a mission.

I dropped off my bag in my room and started out on foot. I had looked online for the nearest fast food. It was about 2.5 miles away near the highway. I wasn’t after a burger and fries, but I figured if there was fast food there might be homeless nearby. The area around the resort was clearly not walking friendly, they had no sidewalk coming to or leaving the resort. They only designed access by car. Google directions for walking the 2.5 miles took me around a long loop making it 4 miles away. I took a more direct route, but that led to walking along a busy road through basically sand dunes, and a portion through open desert. 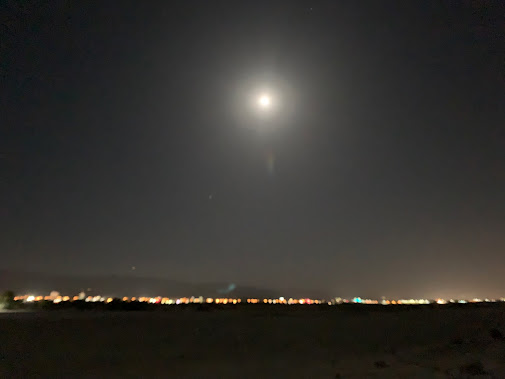 Once I got to where the train tracks and highway met I knew I was close, in fact as I looked down onto the tracks I noticed footprints in the sand along the embankment and knew there was likely a homeless camp in a nearby clump of bushes. 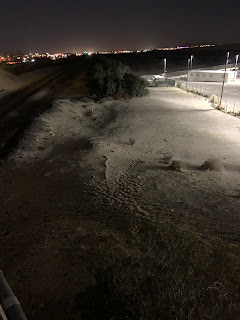 It was nearly 8 PM and it had been dark for sometime. People who are homeless tend to follow the light and I worried it would be too late to catch anyone out and about. I crossed over the tracks but just as I did I saw a man running up the other side of the embankment with a bike. 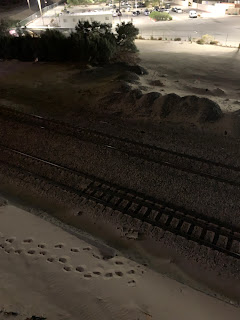 It’s always hard to say for certain if someone is homeless or not. This man looked homeless in many ways, but he lacked a common accessory of the homeless, the large bag of stuff, instead only carrying in a small camelbak. “Excuse me sir, where do homeless people hang out around here?”

“All over. You get some down over at the In and Out or by the Traveling J. Why?”

“I’m from out of town and just looking to take someone out to dinner.”

“I live down by the tracks and I like to call my little place a home, but do I count?”

We make our way to Inn and Out and slowly through bits and pieces of conversation I begin to learn about Jeff’s life. 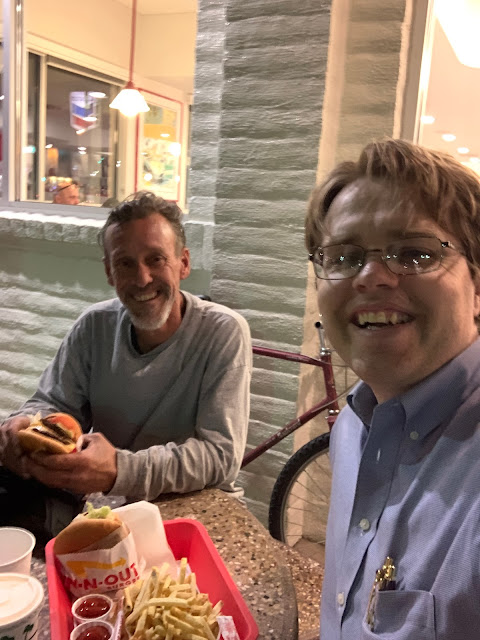 He was raised by his grandmother in Palm Springs. He always struggled with school and by 18 he was forced fully into adulthood when his girlfriend had a baby girl, Abreea. “I wasn’t ready to be a father, I’m probably still not. I mean I paid the bills but I realize now that wasn’t nearly enough.” To pay the bills he had several jobs over the years, spent some time in Alaska on fishing boats, worked construction, and power washing driveways and pools. But every cent that didn’t go to rent or food followed him to the bar, and by the time Abreea was seven, his girlfriend took her and left. This only continued Jeff’s spiral, “I was drinking a large bottle of vodka a day, I was so used to alcohol I couldn’t function without it. Whenever I tried to slow down on alcohol I only replaced it with Cocaine or Heroin. Addiction runs in my family, my father died of a heroin overdose.” When his girlfriend took his daughter and left, it only led him to increase his downward spiral.

Despite his heavy drug use, he soon started a new family and had two sons, but this did nothing to change the direction his life had taken. “I remember in 2007 driving down the highway. I had a little Honda and just not wanting to live anymore. I was high but I still remember it clearly, and remember being aware of what I was doing. I sped up to over 100 miles per hour in the slow lane and then just cranked the wheel and drove full speed into the barrier to end it all. Clearly I survived.” But not unscathed, he was left with a titanium hip and many broken bones and scars.

This was also the end of his new family as again his partner left with his sons. “I deserved it, I never treated them right.” But despite this, in a few years he had another partner. “She had a daughter and I always treated her like my own. She was with me for 10 years, the longest I had been together with anyone, but I again got into alcohol and I mistreated her just like I had so many others. I checked into a rehab clinic about 4 years ago, but it was too late, she left me.”

“So, have you been able to keep clean after rehab?” I ask.

“Not at all, I have since gotten into meth. And it’s hard to hold a job. After a 2014 DUI I never got my license again, and I have a hard time driving after the accident anyways.”

“Do you keep in touch with any of your family?”

“Not really, the boys are in Orange county but won’t really talk to me. Abreea has done well; she is a dental hygienist and married a guy in the military. She is the first one to go to any college in our family and I am so proud of her. I gave her such a hard life and she has done so well. I think of her everyday, and still use her birthday for passwords, but she’s upset with me over some facebook thing and won’t talk to me.”

We enjoy our burger and fries and then we separate back to our separate worlds. He goes to a world where he has lost all his family and sleeps down by the railroad tracks.

I head back to my exotic resort, with palm trees, soon to call and talk to the wife and children I love who anxiously await my return in a few days. 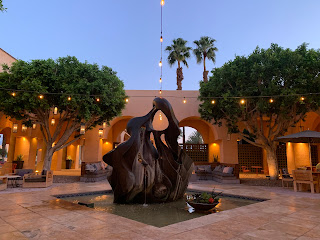 In 4 Nephi we get a description of the people that lived in America at that time: “And they had all things common among them; therefore there were not rich and poor, bond and free, but they were all made free, and partakers of the heavenly gift…And there were no envyings, nor strifes, nor tumults, nor whoredoms, nor lyings, nor murders, nor any manner of lasciviousness…neither were there Lamenites, nor any manner of -ites; but they were in one the children of Christ, and heirs to the kingdom of God.”

I know that Jeff would be the first to admit that he has some things to change before we get there, but as I sit here the next morning typing this on the veranda I wonder what about me and the people like me. Those of us who have the money, the power and ability to set the rules. What do we need to change?

Posted by Nathaniel Gee at 7:17 AM