On my mission several of the Elders were called to teach the Hmong people. They were refugees to our county because they were being killed in their home land. I was on exchanges one night and went to a dinner appointment at an elderly lady's home. I spoke no Hmong and she spoke no English, so we only spoke through translation of my companion. The dinner was the worst I ever tasted. Some purple rice cooked in some sort of basket with a soy mush. There were chicken feet and a big bowl of broth, that was from the soy stuff, in the middle of the table that we were all supposed to drink out of.

We were there most of the night and she gave me a home made tie and as I was leaving she gave me a Hmong name. I don't recall how you said it, but it meant something like Elder Tiger or maybe it was Squirrel. The details are fuzzy.

Looking back I was touched that a woman would: let a total stranger in her home, feed him the best food she could afford (though little it may be), give him a hand maid tie that took hours of labor, and in every way possible honor and love him.

Refugees have continued from that time forward to have a wonderful impact for good on mine and my families life. They have been a powerful example of love, the pioneer spirit and ability to persevere through the worst this world has to offer. Ree Reh, (Here is an amazing article my brother wrote about him) a deaf, Karen refugee, smiles and gives me a huge hug every time I see him. He like so many truely are lights in, what to me would be, a dark world.

I pray Trump figures out whatever security risk he hopes to find in our process in 90 or 120 days and we can get back to sharing this great gift that is America. For America truely is great, but like all great gifts if hoarded for ourselves will only cankur and rot, but if shared will blossom and grow. And I cannot help but think that to deny them access to our country is only to deny ourselves something much greater.
Posted by Nathaniel Gee at 6:34 PM 5 comments:

Does He Even Have a Chance? 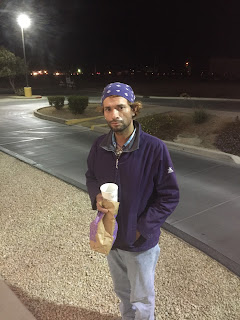 If you are looking for homeless people, or myself, in any given town, one of the first places to look is the local 99 cent store. When I stopped by one such store in Yuma, Arizona, a young man was helping patrons by returning their carts, saving them a few seconds walk. No sign declared his financial need or desire for help, but everything else about him did.

I approached and introduced myself. His name, Oswaldo, was new to me. I began to ask, "Have you...,"

"Found Jesus?" He jumped in before I was able to finish my sentence.

"I was going to say, 'had dinner', but if you want to talk about Jesus, I'm okay with that. But why don't we find a place to eat while we talk."

We begin walking to the nearest restaurant, and being in Yuma, we find a very nice authentic Mexican restaurant nearby: Taco Bell.

"So are you from a church?"

I really didn't know how to answer that. Some years back, I represented my church as a missionary and I am still very involved in church, but regarding this meeting, I wasn't sure if I would say I was, "from a church."

"Oh, isn't that like Amish? You don't dance and use technology."

"Not too much like Amish. We use technology and even dance, but your right, our dancing could use some work."

As it turns out, Oswaldo is the first, "homeless interview" I have done who wasn't homeless. Near homeless, would better define him. A nearby apartment was his for two more days. Family Self Sufficient (FSS), a program in Yuma, had given him the apartment. The program was straight forward enough. It gives the homeless an apartment for a few months while they find work, with the hope that by the end of the program they can afford the rent on their own.

Oswaldo had not timed out. Rather, he was being kicked out for failure to follow rules. His landlord had grown lax with the "no pets" rule and Oswaldo had collected several cats and dogs. But this minor infraction was not his most significant worry. The big issue for FSS and Oswaldo was drugs.

Unfortunately, drugs and Oswaldo had a long history. Heroine was his mother’s drug of choice and at age 6 he was taken from the home, she being unable to keep both children and a drug habit. From there he was in and out of foster care. Part of the time was with his Uncle. It was while with his Uncle that he ran away and found his mother again. At this point she had another child and had either learned to handle a child and the drug addiction or at least gotten better at avoiding CPS. His schooling was not a priority for her and quickly became nonexistent for him. Spending all day with fellow drop outs, it was during this time that he starting using drugs, mostly meth.

Drugs led him to paranoia and violence, and as you can guess the home had no shortage of drama. Being kicked out for periods of time was not uncommon during his later teen years and Oswaldo became comfortable living on the streets. By 19 he stopped coming back home at all and spent all his time on the streets.  Two years later at the age of 21 he found out that his mother had died.

You might think that the woman who consistently chose drugs over him, and more recently kicked him out onto the streets, would not hold a significant grip on his heart, but you would be wrong. The death was over 14 years ago, and tears began to form as he spoke of her death. She had HIV, a failed liver, was a drug addict and alcoholic. Given this, it is hard to call her death unexpected, even at age 42, yet it became a life changer for Oswaldo. He moved from Southern California where he had lived when he heard of the death, to Yuma, Arizona to be closer to his sister, Ruth. But the move was the littlest change. Far more significant was the fact that he got a job at a cotton factory and went clean. For the next 3 years, he worked 7 days a week, 12 hours a day and stayed clean. Since childhood it was the longest he had ever been clean and in his entire life it was the longest he ever held a job. "I could only do it because I was so busy," he explained, "The pay stunk, but being clean and working felt great."

This would be the largest victory in his life, and ever since the victories have been much smaller, "Sometimes I quit for a week and get a job, but I always seem to go back. I can't work and use. Some people are somewhat functional users, not me. Recently I had a friend offer me a job as a lettuce picker and sorter but I didn't want to take it until I was clean because I knew there was no point."

"So, you just beg for enough to get food?"

"Food, drugs and dog food. My three staples. I beg but I feel awful about it. I feel so much better working."

"What are your next steps?"

"I have to take my pets to the animal shelter. I feel awful about them. I have cared for them so poorly and without the apartment I can't just release them. So, I'll go to the shelter and turn them in. Then I'd like to clean my place. FSS was good to give me a place to live and I hate to turn it back a mess. Then I need to focus on sobriety. I've been clean before, I know I can do it again. Then a job. I've got to work. I see guys in their 50's still begging and I don't want that to be me."

"What is the one thing society could do to help you?"

He paused. The pause became awkward, he looked to me almost shrugging as if to say, I'm not sure. But I looked back clearly wanting an answer. His eyes looked up as he continued to think, "I wish they could understand that recovering from drug addiction is a journey, not an event."

I told one of my work colleagues about Oswaldo. He said, "It's sad but he never had a chance. The problem occurred when his mom had a baby as a drug addict."

My colleague has a point. No doubt drug addicts having children is far from ideal, but does he really have no chance?

What do you think? Raised by an addict, perhaps born with addiction, a drop out at 13, a meth addict by 14: Does he even have a chance?

I fear many programs set up to help people like Oswaldo are merely set up to keep them alive, not to help them truly change. Why? because deep down we don't truly believe they can.

I don't know exactly how we can help facilitate that change. But, hope, I firmly believe is the first step, both for Oswaldo and for us. 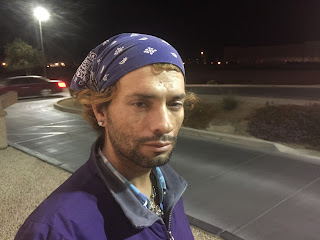 
This past week I went to Boulder City Council Meeting. Of most interest for me was an appeal that was filed against a variance that the city planning committee had granted. It allowed a local developer to put in a town home project in our city.

One of the key points made by all the council members who voted for the variance to be upheld was the idea of affordable housing.  The concept of a starter home/affordable home is not a bad one but I think we need to be careful how far we take the idea of "affordable housing". This is the point I make this week in my opinion piece. I hope you will read it.

My only fear is that this passion for city politics will turn to anger against one another. We should never let that happen. Boulder City is better than that.