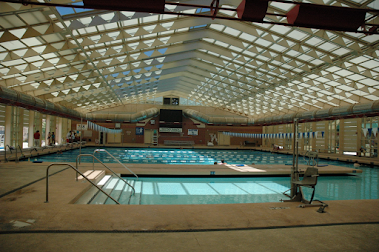 City of Henderson Green Valley Pool- This is where the story occurred.

Kathleen only has Medicare Part A. She was able to get an important surgery, but beyond that, there wasn’t a lot of help. During her recovery from surgery, rent was just too hard to keep up with. She has been sleeping in the desert for 10 months.

I met Kathleen outside a public pool. She wore a nice-looking dress and walked behind her wheelchair. She has the Las Vegas bus system figured out because for the last fifteen years, she hasn’t been able to afford a car. You see, social security only goes so far. So, when the income doesn’t stretch to meet the usual needs, a proud woman like Kathleen redefines her needs. She has decided she needs neither a car nor a roof over her head. She’s seventy.

“The people where I stay have seen me a few times over the years. They’re really sweet to let me sleep on their land,” she says without a hint of bitterness.

We found out the first public pool where we happened to meet was closed, so I put her wheelchair in my car and we drove to a different one, and talked while waiting for it to open. We spent the time under a tree with the car windows open, comparing the four Gospels in the Bible to get the full story of one of the disciples (Peter) cutting off the ear of the high priest and seeing Jesus Christ miraculously replace it where it belonged. It takes all four tellings to get a full view of that story.

I wish I had four views of Kathleen, but I’m happy with the single glimpse I got of her. Our conversation ranged from Bible insights to relationship advice. She probably the happiest and one of the wisest women I have spoken to for the whole year. I’m a person whose life is filled with happy and wise women, so that’s really saying something.

Kathleen quickly summarized the cycle of abuse in a relationship with an unstable man. It’s a cycle she figured out so she didn’t receive much physical abuse during a few of the recent years of her life. She had spent six years with a man whose pattern was easy to decipher: “First, he’s nice to you; second, he begins to pick at you, finding small faults; third, he threatens you; fourth, he follows through on the threats.”

It would have been a chill-inducing goose bump moment. Only it wasn’t.

“It’s not like you don’t have any warning. You just have to get out when the threats are happening.” She delivers her advice in a matter-of-fact way. Again, when I’m looking for bitterness, I really detect none.

Kathleen is articulate. She summarizes the five personalities the man had. Only one of them was a scary one, and she dwelt the least amount of time on explaining the scary one: Satan. The man’s voice would change to a deep and aggressive tone. That’s all she said about him, but I surmised that when she scary voice came out, it was definitely time to leave – for a while. You see, Kathleen did go back. The other four personalities in this guy were such a joy: The Motorcycle Cop, The Plantation Owner’s Son, the Ladies’ Man, and the Little Boy. Each one she described with pure delight in her eyes. Again, there was no bitterness when she was done talking about that man, who left her life in a simple way. He stopped calling and Kathleen was set free.

“I think I must have done him some good, though,” Kathleen told me, “because he’s better. Well, enough better that he’s been with the same woman for twelve years now.”

She seems satisfied that after his five failed marriages, his six years with her, and the twelve years in another relationship, he is probably in a good place. I couldn’t offer any opinions about that. I do hope his current woman has as much innate wisdom as Kathleen, though, and knows when to get out – temporarily.

When the pool opened, Kathleen explained, “I take a short swim and a long bath. I like to get clean and make sure I have time to do my hair.”

After my swim, she was again in her long pink dress with black summer sweater, and I told her, “Your hair looks fabulous.”

You know what? Her hair really did look fabulous.

When Kathleen is offered a choice between five good things, she selects carefully: food, health, clothing, shelter, relationships. If the money can only get her a few things, she’ll carefully budget. When shelter and good relationships are too costly, she’ll do without. Homelessness, for her, is a temporary condition, and she approaches it with the same practicality and faith she seems to have used to get her through surgery and challenging relationships. Kathleen’s perspective and her type of endurance without bitterness made me a less fearful person. Although I only offered her two things: a ride and a swim towel, I think I came away with a lot more than I brought to our morning. 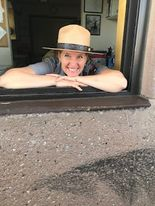 Paige Ladd worked two sizzling summers as a park ranger in Southern Nevada. She kept her cool with lots of laps in public pools. That's how she got this fantastic opportunity to talk with a desert mermaid older than her, but very much a kindred spirit.
Posted by Nathaniel Gee at 12:29 PM No comments: