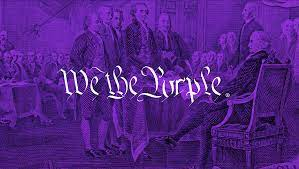 Stirring thoughts at times deprive me of sleep. They demand to be freed from my head to the page.

Does it mean I think a third party is the way to recapture our country? No. I am not opposed to the a third party but the structure of our country makes it very difficult for  third party to suceed. In fact, I think that is the smartest choice Donald Trump ever made was the decision to go after power through a major party. It was clear he could care less which party he used to gain power. He bounced around from between democrat and republican based on which he thought was the best to get him the connections he wanted to advance his career. He tried the third party thing, but in the end he realized our system would only allow him to rise in a major party. He was right, but I digress. So again if it's not the advocating of a third party what is it? That is what I will seek to define in the rest of this article.

Politically purple is a belief that there is more that unites us then divides us. That as much as Fox News trys to paint democrats as crazy left wing nut cases, and MSNBC trys to paint republicans as racist, homophobic rednecks the truth is we would do well to spend our time understanding and getting to know the other side, not belittling them. In doing so we would discover we connect and have much in common with those we thought we could never understand.

Politically purple is a belief that if politicians only worked on things where there was strong majority and support they would have plenty to do. This is an extension of the first idea. If there is more that unites than divides us then there should be significant amount of work in the areas we can agree on. The problem is we waste most of our time focusing on the small ways we disagree. Let's take a specific example, how about one of the hottest topic issues we deal with--abortion.

Abortion is one area where people would consider me conservative. I belive life begins at conception. I belive it is a horrible thing to kill life. I do support exceptions for rape and life of the mother, but in the case of rape I would still promote adoption over abortion. But forget what I think. What do we debate endlessly on? What is our focus? Pro-life vs. Pro-choice. End Roe vs. Wade or enshrine it. If you look on this issue in simple terms we do look like a divided nation. I have seen polls on this and they vary slightly as all polls do, but gallop shows the most recent poll as 48% Pro choice, 46% Pro life, basically split within the margin of error. And it's been that way for a long time, with it flucuating back and forth as to one being a few points over the other.

But again, my belief is there is more that unites than divides us, and that if politicians only focused on things we strongly agree with they would have plenty to do. So how does that work with abortion. A strong majority of Americans are apposed to late term abortions. A strong majortiy are supportive of early term (first trimester abortion). And what about the most viable option outside of abortion--adoption? How much time has Fox News, MSNBC or any of our politicians focused on that? Very little and yet we all agree, democrats and republicans that adoption is a good, viable alternative. So why not focus on laws that make adoption easier for both adopting families and mothers who are not in a position to raise a child? I can tell you there is alot of work to be done in this area. So let's focus on where we agree rather then focus on where we disagree. I would much rather we improve our adoption system and work to convince mothers with unwanted pregnancy to adopt rather than spend all our energy and attention trying to force a legal change that will simply anger much of our country.

Not only that do we really want laws to change against the rest of Americas will? Take early term abortion. Do I belive they should be illegal under most circumstances? Yes. But a strong majority of Americans disagree with me. Rather then try to force laws that they disagree with we need to work on convincing them. Because if we don't we it is only a matter of time before it changes back.

Politically purple is a desire to follow open and honest debate with a deep respect for those that disagree with us. I know smart, talented, hardworking individuals who are passionate liberals, and I know smart, talented, hardworking individuals who are equally passionate conservatives.  Good ideas and really bad ones come from both sides of the isle. I think the biggest crutch our democracy has is not a lack of ideas or ways to move in a positive direction but an inability for those ideas to surface because we stifal honest debate with the need to always be right. Rather than understand why someone disagrees with our position on guns, immigration, or same gender bathrooms, it's much more entertaining to call them names, belittle their views and prop up why our way is best. Not only that politicians have learned that open and honest debate where you recongnize the value in the other sides argument is not a good way to connect with the base. It doesn't help that news organizations have figured out that finding ways to belittle the other side is really good for business. If we want to be politically purple and encourage open and honest debate we have to begin to reject those who fight hardest against it and I would put Fox News, MSNBC, and CNN at the top of the list.

Politically purple includes a willingness to work with the other side and find compromises and paths forward even when it means the other side gets a political win. Both parties are equally guilty of the game of stifiling good ideas in order to win a leg up at the next election. I choose to focus on republicans on this one because it comes to mind right now. Soon our congress will debate on raising the debt ceiling. If a straight up or down vote were held on the debt ceiling it would pass on party lines, democrats for and republicans against. Perhaps at first glance this might make sense. After all republicans generally say they are for less government spending (and that's very true, except when they are in power). But let's be honest, the debt ceiling is to pay for programs that congress has already passed. The majority of recent debt issues are to pay for programs that Trump and republicans passed. And the republicans had no issues raising the debt ceiling or increasing spending while Trump was in office. But now they oppose paying the bills that they voted for. But even if republicans are opposed to this why don't democrats just go to a strainght up or down vote? This is an area that can be covered under reoncilliation (simply meaning they don't need a 60 vote majority in the senate). They don't want to go on record as voting simply to raise the debt with out getting it tied to other things that republicans would look bad for not voting for. They know if they go it alone republicans will use it as a talking point (a misleading one) on commercials in the midterms. Well they want there own misleading talking point to hit back with. So, we might defalut on the payment obligations we committed to because both parties hope to get the upper hand at election time.

Politically purple is willing to go against your own party when you feel it is the right thing to do. My favorite politicians are Susan Collins, Joe Manchin, Rand Paul, Krysten Sinema and Mitt Romney. Do I agree with them more than anyone else? No. But they are willing to buck their party when they feel it is right to do so. We need that kind of courage, and doing so doesn't generally pay. Many senators who do this we punish rather than praise. Mitt Romney is a good example. Who serves the people of Utah better Mitt Romney or Mike Lee? Without hesitation many would assume Mike Lee, and arguments can be made for both. But if you go simply by amount of Utahns that approve of the job they are doing Mitt Romeny is more popular. What? How can that be. Half of Utah hates the mans guts. Well, that is not true, about half of Utah's republicans hate the mans guts. And if you say who serves Utah republicans better, Mike Lee is the run away favorite. But you aren't elected to only represent your party (although most politicians have forgotten this). Mitt Romney has pockets of republicans that like him, and is overwelming popular among Utah democrats so his overall approval rating is higher. But if the election were held tomorrow he would loose, not in a general, I think he'd win in a general election but never get there because he'd loose in a primary. Republicans would thrown him out, why? mostly because he voted to impeach Trump. Did I agree with him, no. But I deeply respect him for doing it when he knew it would put a target on his back within his own party.

Politically purple includes a willingness to allow the people's chosen people to lead. Nothing is more vouge than political recalls and calling for your political opponent to resign after they have won an election. It can because of something they said yesterday, last year, or 20 years ago. Maybe because of one vote you disagree with or because you don't like them. But the fact is they were elected, let them do their job. If you don't like them, don't vote for them next time. The most recent recall debaucle was against Governor Gavin Newsom. Would I vote for Gavin Newsom? No. But the majority of Californians did, so let him govern. They voted for him to be their governor for 4 years. Let him do his job. The recall was, like almost most recalls, a total waste of time, effort and money.

Politically purple includes offereing grace to others especially our enimies. This goes hand in hand with the last point. We all say stupid things, at least I do. When our enimies say stupid things or even do them, do we allow them grace or do we use it to jump down their throat, play it on repeat over and over again, use it to score political points or drive up the base and if we are the media to drive up our ratings?

Are you politically purple? I would encourage you to embrace it if you have not. Will it ever be a popular movement? I don't know, but one of the beutiful things about being politically purple is that it can bring you peace in a political world that rarely offers it. I don't mean to say I never have frustration or sorrow over our system, clearly you get the sense that I am disappointed in much of what goes on in politics, but I am rarely angered or aggitated by something that comes from the supreme court, politicians or policies. It has allowed me to see both sides value and be at peace with the outcome and that is a nice place to be.

Posted by Nathaniel Gee at 4:05 AM