Traveling the World in Search of... 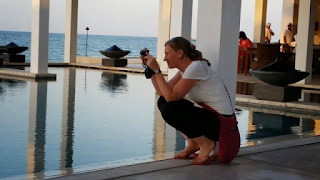 Noelle Poulson
There aren’t too many bucket lists that don’t include in some form or another the line, “world travel.”

But some of us have been more successful at others in crossing that off the list. Noelle and I used to spend afternoons together working on Calculus homework, but no sooner had she finished that than she, her father, and mother packed up and took a year to travel Europe. What leads a family to pack up and head to Europe? “My dad was a stockbroker and he was ready for a break. Kind of a mid-life crisis.” She recalls.

They didn’t just see the tourist sites but she learned how to live in a different country. “We would find a place to live for a month or two and get to know the area. We did go into the big cities but also did the day-to-day groceries and really lived there.” She covered French, her dad German and Spanish and her mother Italian, so they had the bases covered.

After a year of travel, it was back to school, and following in the footsteps of her father she decided to go into finance and graduated with her bachelor’s from the University of Utah. Her dream was simple, help those who didn’t have the finance education or access to it understand fiance so it could work for them, instead of against them. Her particular focus was the desire to help refugees. But upon graduation, she found that there wasn’t much desire for companies to help such individuals. “I got a job at Fidelity and as most started as a stockbroker.” Helping the rich get richer was not her idea of a dream job, and she was pleased when she was able to move over to helping people and small businesses with retirement plans. “It was nice to really help people with retirement advice but it had similar problems, they didn’t want you to spend your time with people unless they had a decent amount in accounts with us. So the single mom with only a few thousand didn’t get the one-on-one help she really needed.”

Noelle realized that if she was ever going to help the people she wanted to help she needed to change gears a bit, and she always felt a special connection to London. She decided to fulfill both passions and began to pursue a degree in international relations at Webster University. She loved London, but graduation brought a problem, without school to go to she couldn’t keep her visa.

She decided to take some time off and traveled to Thailand and Asia. There while hiking in the Himalayas she met a kind Brit who hiked with her, Chris. 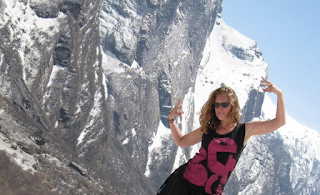 Noelle at Annapurna (the Himalayas for less worlded traveled like me) 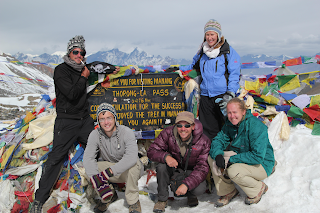 Noelle Hiking in Manang, Nephal
He too was a world traveler and was currently working as an English teacher in the Middle East. They parted as friends and Noelle went back to America. But she no sooner landed than she felt London pulling her back. “It’s more than just the history. The city is alive, you can fill it in the streets. It is its own organism. And I love it.” She states. And you can tell, she has truly become British, throughout the interview she speaks of her internet being “rubish” and about when they go on “holiday”. The problem was how to get the Visa to get in. She looked into it and the best way was an entrepreneurial visa. So she started a business in London. 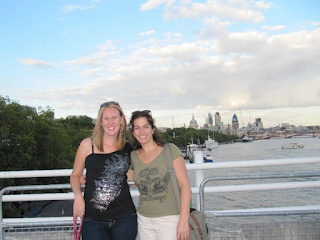 Noelle at the River Thames (not the Thames River)
Now in our world of crazy tech startups, I have heard of some crazy businesses. But taking people to see sights of London sounds fairly normal until you learn the details. She wasn’t taking tourists to see the place William the Conquer learned how to use a toothbrush. No, this was locals, to find places to hang out. Like a very personal yelp. “People take go front their home to work and make the same stops every day and they may not realize they pass by a really cool speakeasy type pub only a few blocks from work.” And they paid her to find these. She admits she wasn’t getting rich, but she had enough to survive and enjoyed being in London. During this time she kept a blog, where she walked every street in London and wrote about he experience. She was on TV and interviewed by BBC, here is a great article about it. She really grew to know the city she loved in a way few if any can say they have. 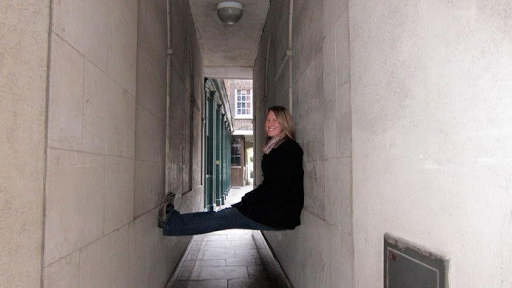 Noelle in a small London Street
The biggest change was Chris came back home to London to visit and their friendship turned into more. And they decided that life together was the right thing, even though that meant she would need to leave her precious London and move to Oman in the Middle East. Oman was a new adventure but not exactly the freedoms and culture of London. But it was here Noelle found a new passion, Scuba Diving. And with it a new dream, for her and Chris to start a small dive shop. 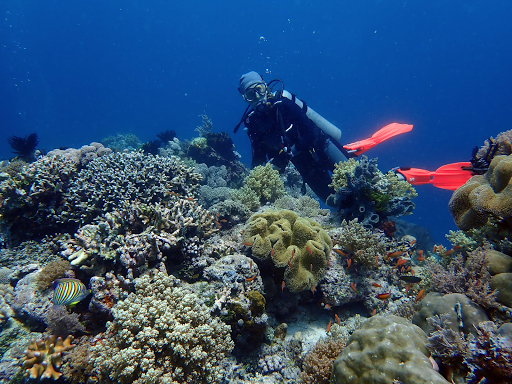 Noelle diving in Timor
This dream sent them in search of a perfect dive location. They found some great ones. But one grabbed their attention, a small and fairly new country Timor-Limor. They looked into it and they were planning to do it when they happened to see a job for an English teacher that matched up with Chris’s skills. He got the job and they moved, and have been there on and off ever since.

However, the dive shop hasn’t happened. But her desire to help and find a way to contribute in a positive way has not changed and in Timor, there has been some opportunity. She was approached by NGOs to do some work for them. She took the job and has begun to do work for Oxfam and others. In a country where most people sustain themselves on small farms, there is a lot of need for investment money in infrastructure and other areas. However, in this, she has seen both the good and the bad. “Organizations want the big name projects they can send out to donors but not always what is needed or wanted. They fight over things like whose flag lines up where or who gets their name first on a program.” She mentions several examples. There is a need for irrigation projects but small sustainable ones. That is what the farmers want, but big organizations with donors are included to look to a large dam for a solution (hey I get this, who doesn’t love dams!). It a big project, with lots of spotlights but would it help? Could the farmers even afford to maintain it?

Another great example is the trash in Timor. People place all their trash into large concrete containers on the street. An organization came in and built beautiful new concrete boxes designed to allow for the separation of trash for recycling throughout one of the cities. It made great social media posts, the problem? They have no recycling program or place to send it so there are zero actual benefits.

And it’s not just in getting the right programs. Noelle has seen the unintended consequences of organizations' involvement. When Timor-Leste joined the United Nations in 2002 this fairly new country got a huge influx of cash and projects going to it. That sounds like a really good thing but it had its downsides. UN sent in a lot of staff, that staff had higher wages and with it per diem. That meant that they got their housing reimbursed and the amount they could afford to pay for rent was several times higher than rents on Timor-Leste. As they came landlords realized they could charge much more and get it because the UN was around. Rents skyrocketed and pushed forced many locals out, into worse living conditions, or left them with no money after rent was paid.

But all is not bad, “There are some really good dedicated employees working on some projects that will really help the people of Timor-Leste.” Noelle notes. And she clearly sees value in what she and her husband do as they continue to live and work in Timor-Leste.

As I interview Noelle I can’t help but take away two lessons. Life is complex. We often see life in Cliche’s but so few lives fit one cliche or another. I ask her if she ever would write about the people she has met in Timor-Leste. “People tend to think of people hear as one of two extremes. They see them as living impoverished incredibly sad lives, or they see them as living romantically simple lives. While that is somewhat true it is much more wrong. And it is difficult to convey the complexities of what is going on.” She also notes it is a very small nation and she isn’t sure how people would take her writing about them, but there is no doubt it would be incredibly interesting.

She notes a similar complexity in the life she has lived. “When I speak to some people they sound almost jealous of my life, going from country to country and having very diverse experiences. I see it as that I have had a life with significant breadth, but not so much depth. Many people build a strong community around them and stay put in one place for a long time and they get depth in that community. There is value in that, and sometimes I wish I had it.” I appreciate this insight and realize we all balance depth and breadth of experience.

But the last lesson I take away is the freedom many in my generation have to live a life for a cause. Not that those who went before us lived meaningless lives but historically most people have had to take what jobs they could get to put food on the table. Increasingly, we as a society have enough free time and wealth that we have more flexibility in our profession. Many, like Noelle, have used this to try to help the world be a better place. But even when our intentions are the best, it isn’t always easy. When you really peel back the curtain, helping a good cause is a complex thing. Corruption, human jealousies and imperfections, and so many other limitations flood into the world of non-profits, just like they do in the world of profits. That isn’t to say it isn’t worth it. It just means that like most worthwhile things in our lives it isn’t easy.

I wish Noelle and everyone who continues to try to improve this complex world we live in the best. The more people who are willing to dedicate themselves to trying to improve rather than tear down the better this world will be. And while Noelle may do it through non-profits and NGOs, I’m secretly holding out hope she gets to do it by owning that little dive shop. 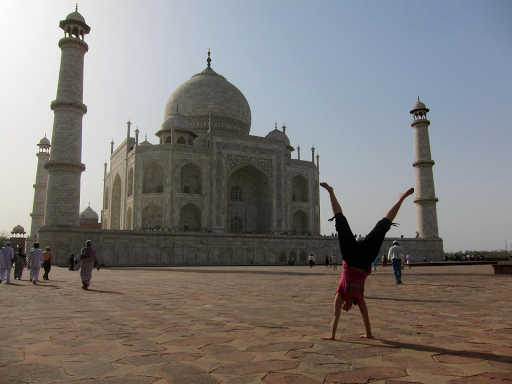 Doing a cartwheel at the Taj Mahal...doesn't everybody?
Thanks, Noelle for the chance to interview her. If you liked my writing please check out my other blog posts or you can really make me happy and purchase my book. Amazon link.
Posted by Nathaniel Gee at 4:15 AM