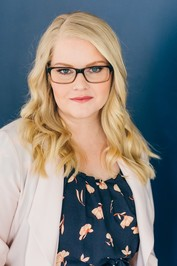 Valerie Loveless
Reading author bios often makes me feel a little insecure about my dreams as a child. They often start with, “When I was four years old I remember telling a story to my daddy and I looked into his eyes and knew I’d be an author someday.” Someday I’ll read one that says, “It was at that moment, as I passed through the birth canal that I knew I would be an author.”

That is part of what was so refreshing about speaking with Valerie Loveless. “I had no plans to be an author.” She had always been a creative individual and loved music and art, but writing was not one of the creative outlets she took. The first inkling of writing came when her and her sisters collaborated to write two children's books, Singing Not so Sweetly, and Anabelle Loves Babies. But even then the idea of writing a full length novel wasn’t on her mind. “There is a big difference between writing a kids book and something that is 85,000 words,” she notes.

What changed this was another one of her sisters. “My sister wrote a full length novel, and I was like, if she can do it then I can, I am way more creative than her.” That became the inspiration and motivation for her to begin to write. They say, write what you read and so she instantly got into Science Fiction. “I finished one novel and started several others, but they were no good. I just hit a block when I write sci-fi. I love it but at least for now it’s not what I am meant to write.”

The next trial was with romance, “I began sending chapters of a story to my family about a young girl who wrote for a local gazette. The story bounced between the young girl's life and the crazy, over the top, stories she told in the gazette. “I loved writing the gazette portions, because it allowed me to not hold back at all.” When asked what inspired the book she notes a specific episode of Dr. Quinn Medicine Woman she saw that had a story of a local girl who wrote for a local publication. “I liked the idea and it kept growing on me.” The other inspiration that she only realized in hindsight was Little Women. And the similarities are striking. Not her book, but her story. She was sending these fun over the top stories to her family. Much like Jo March in the attic..

After eight or so chapters sent to the family Valerie decided, like Jo, that perhaps there was a market for this. Her sister had not turned her novel into any publishers, but she decided she would be different. Did her family love the novel so much that they said she must publish? “No, they were like, good story, but didn’t really push me to publish that was mostly me,” Valerie Admits. Once the manuscript was finished she turned it into a few publishers and was over the moon when Cedar Fort said they would publish it.

But her relationship with Cedar Fort was about to go far beyond just publisher and author. “As part of promoting my book I wanted to do a podcast, where I would interview other authors about their books and their writing journey.” Cedar Fort loved the idea and asked that she begin doing it for them and their authors. It only expanded from there. “Now I work for Cedar Fort, and in addition to my own podcast I produce another four podcasts.”

And while she did all this amazing recording and podcast work she continued to write. Enduring Promises of the Heart came out in 2018. It has been warmly received, one of her favorite review was from Barbara Raymond, it's a five star review on Amazon that reads, “This book is a definite read but the ending was, oh my, I can't even come up with the word! The end, the end? Really. You will definitely enjoy this book. I definitely recommend it.”

Valerie and her readers loved the story enough that she followed the book up with a sequel, Unbroken Promises of the Heart, that came out in 2020.

In addition to the podcast Valerie also began a newsletter and on April 1st 2019 as part of an April fools joke she told her readers she was working on a book called, My Bigfoot Boyfriend. But the joke only grew on Valerie and by April 1st 2020 she had decided that she was going to write that book after all, and this year in August My Bigfoot Boyfriend was released. The book which is more a novela at just over 30,000 words is also her first self published book. Why self publish a book when you work for a publisher? “Well for one thing it was very short, but the honest reason is that I couldn’t imagine dealing with the team laughing about it when it was pitched.” But it did give her a great chance to better understand a business that has become a huge part of her life. She had to do everything, the cover design, the manuscript set up, setting up the printing. “It was a huge lesson and now when I take issues or questions to different people in the office I understand what I’m talking about.”

So, what’s next? She hasn’t completely given up on doing some Sci-fi, but the next big goal is a hallmark movie. “It’s not too crazy right? After all a few years ago I didn’t think I would be a published author, so who’s to say I couldn’t do this as well.” It’s that kind of ambition and optimism that has gotten Valerie through some amazing adventures, both in and out of her text, and Hallmark or not you can bet her future will be exciting.
Posted by Nathaniel Gee at 2:23 PM