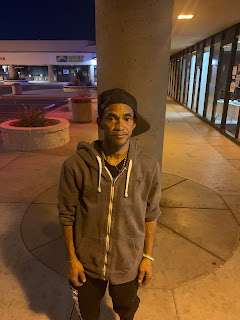 Roland at the bus station before we said goodbye
Six hours is way too long. I hate long drives, and even more than the drive, I hate making it longer by stopping.

“I need to go to the bathroom.”

“There are plenty of old cheerios and fries jammed in those seats back there.”

“Is that the gas light?”

So it was a surprise when the sudden desire to pull over for the man who looked like a vagrant walking along the highway came over me. I guess I shouldn’t be too surprised; Anyone who reads my blog knows I don’t mind meeting new people under the strangest of circumstances, but the problem with people on the highway is a problem that fits best in a jr. high math class:

If a van is traveling the highway at 75 mph and passes a vagrant walking at 2 mph how long does the driver have to notice the vagrant and decide to pull over before he is so far down the road that the driver feels it’s too late?

And what causes us to flinch? Many things: We have all heard of stories of people getting picked up and then them finding bodies on the side of the road a short time later. In addition, at this time we were in the middle of the Coronavirus pandemic. Our leadership had instructed us to avoid one another; what better reason is there than that? And of course, number three, I don’t want to get involved (I wrote on this earlier.) And don’t get me wrong, your safety is a valid reason to debate, but I can attest that I felt a real clear impression to pick him up.

The difference this time was I didn’t hesitate. It likely helped that I had recently gone through a similar situation and Jeanine had been nothing but supportive (she really is amazing). I quickly followed the impression and pulled off the road only 100 or so feet in front of the traveler, which, if you are still following the math problem, means I have lightning fast reflexes.

A short, skinny man carrying a small plastic bag and a longboard got in the front seat. We were traveling, so our front seat was covered with snacks, garbage, diaper bag, etc. We pushed what we could to the side and tried to pass the longboard back so he could jam in.

“Thanks for picking me up. I can give you money for gas,” He offers as he gets situated.

“Las Vegas.” His voice was soft and had a sort of accent, and the two made him very hard to understand.

“We can take you to St. George, but you will have to get the rest of the way from there. Why are you going to Las Vegas?”

He looks perplexed. “That’s far. But you can’t take me there?”

He looks concerned, as if to say, ‘what other choice do I have?’ but just says “I mean I will get there tonight?”

We are rolling down the road by this point and we offer him something to eat and a water. He graciously takes both. Finishes the whole water quickly, we offer him another, he again finishes quickly, so we offer another, again with the same result. It’s clear he is very thirsty and has nothing to eat or drink in sometime. “How long have you been walking?”

“About 2 hours. You sure I couldn’t get a bike or something in St. George, so I could ride it to Vegas”

“That would still be a long ride. What are you doing in Utah?”

“They drove me up last night to help them move a big chair, but then I lost my friend at the gas station. Could you get me close to Vegas?”

“I’m sorry I need to stop in St. George. So, you like to longboard?”

As we spoke a picture of what was going on began to become clear. This was not a homeless vagrant as we had guessed. While he was hard to understand, the more I learned the more I realized this was an adult, who was very much a child. He lived in a group home, didn’t know his phone number, could tell us the basic location but not the address. And no matter what I said I could tell that deep down all he could think about was how could he get home tonight.

It was like you losing your 8 year old at the gas station, them not knowing what to do and then they start walking home, when they are 300 miles away. Why didn’t people stop and help him, after all if you saw a young child in need walking along the highway wouldn’t you stop? But he didn’t ask, and he didn’t look like an 8 year old. He looked like a vagrant, someone who knew what they were doing walking down a highway, if such a thing exists.

We were lucky. The Salt Lake express was running from St. George to Las Vegas, we got him a ticket and made sure he got on the bus. The bus line was super helpful and let him stay with them until our amazingly generous friend, Jason Segedy, (who was willing to pick up a total stranger at midnight at the drop of a hat) picked him up and took him back to his group home.

I wonder what would have happened to our friend Ronald had we not picked him up. It was hot, very hot, he had no water, no food, night was coming. Even picking him up, it took us a lot of conversation, hard to understand conversation, to realize what he really needed and that giving him a ride part way and then dropping him off would likely just put him back into the same situation. I hope that if we had missed him that someone else would have picked him up. That they would have taken the time to figure out what was going on and what he really needed. But if you had been the car behind me would you have stopped?

Now I don’t doubt that if you would have known the situation, essentially a child, hundreds of miles from his home, lost and just hoping to get back, that you would have acted. But that’s it, we never know. We need to make split second decisions when traveling at the breakneck pace that society sets for us, whether to stop and put our own lives on hold to help others, or to stay in the fast lane. And if we don’t watch, listen, and be prepared to set aside our priorities we will leave Ronald and so many others like him lost on the side of the road.
Posted by Nathaniel Gee at 8:50 AM