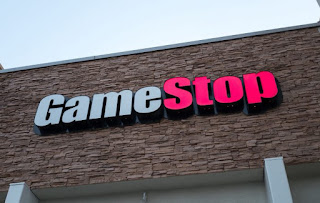 My argument is clear, please watch this GameStop scenario from the sidelines, but I write to two audiences. First, the general public who don't have a strong opinion on who is right and who is wrong between the billionaire hedge fund managers shorting stocks and the small guys who write on reddit from their parents basement. And second, those who care passionately about this fight. Since, my arguments are different for each I will write this post in two sections.

Section 1, those without a dog, cat, large rodent or any other animal in the fight.

Whenever you see a stock blow from $17 a share to $450 it becomes easy to say, "Why didn't I buy it last week?" But of course realistically back when it was selling for $17 a share you didn't even know GameStop had a stock, but you did start to hear on the news about it when it had only jumped to $100 a share. Why didn't you jump in then? You could have made more money in two days then you make in a month. But why sit here and kick yourself for not getting in yesterday? Why not get in today? Maybe there is still money to be made on this thing.

The simply answer is there is still money to be made. This stock is not done with crazy fluctuations and if you guess correctly on which way those fluctuations have to go you could make money, lots of  money. Oh wait, no you couldn't. Here's why.

Be realistic when you start to day dream about what could have been. How much money do you have sitting around that you could throw at this anyways? How much would you be willing to miss? If you are like most people you don't have $100,000 sitting under you couch cushions waiting for a wall street battle to take advantage of. So, $1,000 if you feel really risky. Turning $1,000 into $4,000 would be nice and all, but it's not going to set you for life on a beach somewhere.

Second, there was an IF a big IF in my previous statement. That is, there is money to be made IF you know which way the stock will fluctuate next. Depending on who decides to back this fight GameStop may have just begun to rise, but it could plummet tomorrow. If I had to guess there is much more downside than up in this stock, but it could rise for a long time before the ultimate crash. So do you buy or short? Neither. Because while buying stock is not always gambling, here it is and gambling is never a good idea.

But all of that is not the #1 reason you should stay on the sidelines. And to explain the #1 reason, I want to take you on a little journey. You happen to be scrubbing the cabinet underneath the bathroom sink, you have never done this before, after all, it's the cabinet under the sink. But you feel ambitious and you touch the p-trap and the door hinge at the same time and are magically transported back exactly 24 hours. You find that every time you touch these two objects at the same time you again get transported back 24 hours. You repeat this a few times and you find yourself back a week or so ago and GameStop is selling for $20 a share. You could take a second mortgage out on your home, put it all on GameStop and be set for life. Should you?

If you do what are you really accomplishing? As tempting as it would be I feel strongly the answer is a resounding NO. Why? Are you putting money into a company that will use that money to do good, get the world a product, make lives better with that money and thereby get a return on your investment, or are you simply seeing lots of money flow from other peoples pocket into yours? While it may go through a stock trade at the end of the day all that is happening is money flowing from others to you. That is not much above stealing. It hurts the people who loose the money, but not near as much as it hurts you.

The greatest value money has, is the journey we take in earing it. The lessons it forces us to learn, the people it forces us to become. Money for nothing, especially large sums of it can have devastating results. So, don't do it. Just sit back relax and hope that this all works out without you playing winner or loser.

Section 2- For those who want to buy GameStop in the name of social justice.

For you, I hope you noticed the very stereotypical way I introduced the two sides above. Wall street fat cats against reddit users in their parents basement. Neither of these stereotypes is likely very accurate. That is important to point out because on both sides of this fight you have little guys and on both sides of this fight you have billionaires. And there will be more losers than winners, and most of the losers will be the little guys and most of the winners will be billionaires on both sides.

While we are breaking stereotypes I don't think these evil hedge fund managers are as evil or conspiratory as many think. I know, arguing for hedge fund managers is not a popular thing, but here I go. I do not believe in shorting stocks. But there are valid reasons for doing it. The argument is they spend all day bad mouthing stocks, promoting why they should go down, pushing hard working companies down over and over again and make money on it. There may be some truth to this, but not much. Most people short companies not in an evil conspiracy to make them go down in value, but because they think the company is overvalued and they put their money where their mouth is. And they have less ability to fluctuate a stock than we may think.

Did short sellers hurt GameStop stock? Yes, but that is not why GameStop has been going down for years. It's because they are losing money, market share and value. Those have much more to do with this stock going down than anything the short sellers are doing to it. And those short sellers are taking a risk. Could GameStop through innovation turn around and prove the short sellers wrong? Absolutely. Tesla has, so far. Lot's of people were shorting Tesla because they felt it was overpriced (and for the record, it is). But the company kept moving forward and most of those who bet against it lost and lost big.

The problem is when you mislead or tell outright lies to push a stock one way or another to make money on it. This is done by short sellers and buyers alike, it's wrong and illegal. But it's very hard to prove if someone is pushing a stock or short because they honestly believe the company is good or bad, or simply to make money. It's not only hard for those who are listening it's hard for the person who is saying it. Anytime money is involved we are not a good judge of our own motives.

And that is another reason why I am apposed to buying GameStop or AMC as part of a cause. First, are you really doing it as part of a cause or are you secretly hoping it works in your favor? "I will fight those big fat cats, and if I get a little money on the side while I do it, well then..." Also, are many of the people pushing this really in it for the right reasons or is their righteous indignation simple a pump and dump scheme. Maybe it started as righteous indignation but has turned into a pump and dump. Some of the "good guys" on this fight have already cashed out to the tunes of billions.

Lastly, what are you trying to prove? The little guy deserves a break? I can tell you when there is a huge run up like this many little guys throw their money in and are left holding the bag.

Maybe you are anti-hedge fund. But what is a hedge fund? It's not just a bunch of billionaires anymore than reddits all people in their parents basements. Hedge funds are often risky business and part of that risk is it's often on borrowed money. People are loosing their livelihoods, homes and lives over this and other hedge funds. But will this make hedge funds less or more common? The things that fuels risky behavior on the market is this type of volatility. People will be doing crazy things for years because they think it's the next GameStop.

Maybe you are anti-shorting. While I understand the argument to short, I think it's really bad idea. I would be supportive of getting rid of the ability to short a stock. It's highly risky, not well understood and you are betting on people to loose. But with that said, what is happening with GameStop will convince more, not less people to short. Why? Everyone knows this game will end. GameStop is not worth $400 a share. It's not worth $100 a share. Those promoting it admit that. So where does this ultimately end up? Smart money is that ultimately GameStop will return to $20 range. So while a few hedge funds may be crushed, there are more in the wings. And my guess is some of them have begun to short GameStop and as it continues up are expanding their short position. So you might be convincing the little guy to push money into GameStop so it can fall into the pockets of the very people your fighting on the way back down.

Stocks when used correctly are a wonderful thing. They allow us to put money into companies we hope will make our economy and world a better place to live. When they do, they give us some of that profit in return. But neither side is this battle is using the stock market wisely. And some will make large sums of money in this, some will loose large sums, but like most wars there will be far more casualties than victors, and ultimately no one will really win.

Posted by Nathaniel Gee at 3:04 AM