What do you do with Crazy? 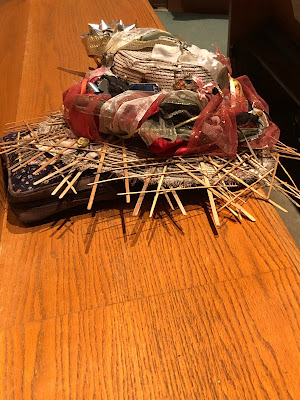 “What can I do? This is the third promotion that I have been passed over for?”

“Steven, you are doing a good job. We appreciate what you do for us, you play an important role in coming up with drugs that save lives.”

“But am I stuck? Can I ever move forward?”

“The man who got the supervisor position has a PhD and is a well published doctor in chemistry. At the end of the day he was more qualified. We appreciate what you do but I have to go with the most qualified candidate.”

Steven went back to his office logged off his computer, jumped into the car and headed to his condo, both of which he hoped he'd be able to make the payments on this next month. The sun had several hours earlier given up after a long day of unsuccessfully trying to win it’s battle with the snow and ice that perpetually clung to world, keeping it as cold as Steven felt inside.

That night, sitting alone Steven turned off the T.V. and pulled out his old bible.

“Good Master, what good thing shall I do, that I may have eternal life?

...if thou wilt enter into life, keep the commandments.

He saith unto him, Which?

The young man saith unto him, All these things have I kept from my youth up: what lack I yet?

Jesus said unto him, If thou wilt be perfect, go and sell that thou hast, and give to the poor, and thou shalt have treasure in heaven: and come and follow me. But when the young man heard that saying, he went away sorrowful: for he had great possessions.”

Steven had been raised in a good Catholic home but with all the work and school had not had much time for church. Suddenly after reading about this young man he found himself asking, “God is that what you want me to do?” Steven prayed in his heart. “I’m not rich, but I guess. I’m doing okay. Am I just going round and round. Am I ever going to get any further? There will always be someone with another degree more than me, always someone ahead of me, perhaps it’s time to dedicate myself to God."

And that was it. He sold the condo and everything in it. Quit his job and drove the car to San Francisco, after all Chicago has tough weather to be going without purse or script. Once in San Francisco the car was sold and he took to the streets. At 30, he was wandering the streets, attending mass every day and spending up to 5 hours a day reading from a Catholic prayer book.

“I walked to San Diego and was there for a few years, when in 2009 I decided to do a walk across the country. I walked from Pacific Ocean to Myrtle Beach. It took me a little over a year. There were too many bugs over there, and prophets always seem to wind up in the dessert, so I walked back.”

San Diego was home base for a long time but eventually he got sick of landing in jail. “The police kept sending me to jail, the judge would always let me out. If you are good and don’t cause any trouble and just tell the truth the judge knows what is going on and will give you a ‘get out of jail free card.' But you get sick of it, so I finally decided to leave. I spent a few months in Brawley and then Blythe and now Yuma.

Why not become a priest? “To be a priest you have to fill out applications and get approved to a seminary and you can’t really do that while you are homeless. So, I promote, I am a promoter, promoting the religious life style. I’d say I am like the cover page on a website. I’m there to get clicks and get people on the site, if they want to find the subscribe or donate page they can find it, but I help them get there. You don’t need to be a priest of monk but everyone should have a religious lifestyle, so that is what I promote. If you are reading prayers the way you should, 1 hour morning, 20 min, midday, lunch and afternoon, 1 hour evening and some time for readings in between you won’t have time to do the sins that can get you in trouble.” 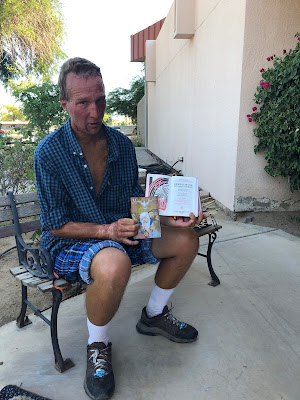 “It’s almost six so I need to get to mass.” He starts to pack up and we walk the 15 minutes to St. Frances of Assisi Catholic Church. There I get to listen to mass the way people did for ages, in a language they didn’t understand. The mass was in Spanish and Steven who is not fluent in Spanish does know every prayer, and some are quite long.

Steven and I stand out like sore thumbs, (I don’t particularly notice sore thumbs but we did really stand out). For one thing we were both under 50. The only others being a group of three teenage boys who were dragged in by the ears a few minutes late. We were the only non-Hispanic people in the audience, we were the only ones with beards, but perhaps what made us stand out most of all was Steven’s hat. This hat is a sight to behold. “I got this straw hat in Ojai California, but in time it began to wear out were I grabbed it to take it on and off, so I reinforced it with some sticks I glued. I just kept gluing things on and over time, I now have this hat. The other thing that stands out on Steven is that he is scared, on his neck, ear, chest, arms and hands from a very bad burn that he says he doesn’t recall, because it happened at age 2.

People smile and nod as they walk by Steven and I. Steven participates in every way possible, singing loudly with the songs, in a falsetto higher than mine (and that is saying something). Reciting all the prayers, standing at all the right times, except for one thing. Steven doesn’t go up to get the sacrament. Why? I am not sure. I don’t understand all the rules with sacrament and the Catholic church but what is clear from the people around him is they are not comfortable around Steven. They are unsure why he is there, unsure if he is crazy, but they are sure he doesn’t fit in. I am fairly confident one of the reasons Steven does not partake of the sacrament is he doesn’t want others to feel uncomfortable.

We enter the church, attend the whole mass and then stay after for Steven to pray for a bit. We walk by dozens of people and no one, not one tried to talk to us. One could argue that they had a valid point, we didn’t speak Spanish, but I’m not sure how they would have known that. After all, he did recite every prayer and song in Spanish. And don’t take this the wrong way. This is not to attack the many people who attended mass that day. I don’t think they are hypocrites or bad people. My guess is that church was full of wonderful people who serve others and love others and do their best to follow Christ. My point is that we struggle to know what to do with people who are different than ourselves, different race, culture, religion and probably more than any of those, different levels of sanity.

I bring this up because I am right there with these people. True, I got to sit down and get to know Steven, but I have no clue how to help him. I am not a doctor, but I think he has a mental illness of some kind. Is it an anxiety about work and religion provides a convenient scapegoat? Does it have to do with the severe burns he received before he has memory of it? I have no idea.

But whatever it is, he is kind, happy, keeps himself cleaner than most people who live on the streets and really mostly keeps to himself. What would 'help' for Steven look like? An institution? Drugs? He doesn’t want those things. The easy answer might be to just leave him alone.

If your hoping for an answer on what should be done about the Steven’s of the world, and there are more than you think, don’t ask me. Because the answer to this one is: I really don’t know. But what I do know is, we will never find it by pretending he and the thousands like him don’t exist.
Posted by Nathaniel Gee at 5:29 PM