When did you get out? 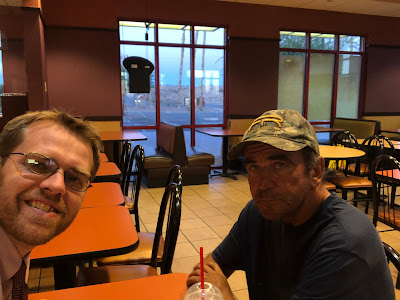 Allen and I at Arby's
“We will go in and collect the weapons, you watch him. One false move and you know what to do. We’re counting on you Allen.”
The Commander took several of the men into the small house that had been used as a weapons stash, leaving Allen staring into the face of a young man, a boy really, he couldn’t have been more than 10 years old. Allen kept his machine gun pointed at the boy. He wasn’t much of a threat to the marines except in his ability to run off and warn others. They had no desire to take any prisoners, so the mission was simple, get the weapons out of this small home and once on the road allow the boy to run off. The plans changed with one small movement as the boy reached for his pocket.
“Keep your hands out of your pocket.” Hadn’t they searched him for weapons? But as his hand continued into the pocket Allen realized that the others hasty search could have missed a small detonator. Every-man on this mission except him was potentially about to be blown to bits and there only hope was for him to act quickly. Most shots would still allow for muscle movement and even a slight movement would allow for a detonator to be triggered, only one shot would guarantee the men's safety, Allen took it.
-------------------------
“I’m fine, let me go out.”
“I’m sorry Allen, you aren’t ready to go out on patrols yet.”
“It’s been three days. You expect me to just sit hear all day and go crazy.”
“I’m your commanding officer, you will go when I say you are ready.”
“Worried I’ll shoot up a village of innocent children.”
“Allen, that’s enough.” His voice was stern, but softened as he said, “Allen what you had to do would have shaken up any of us. And it was the right call even though it wasn’t a detonator, you didn’t know. But I need you to get it together, I will send you out as soon as I think it’s right.”
Allen walked off. His three closest friends died that day when there vehicle triggered an IED. “I am not proud of what I did. It haunts me to this day. And the fact that I did it ended up saving my life a few days later only makes it worse.”
He came back from the Gulf War and went back to doing exactly what he did before the war, construction. “My dad was a general contractor and I worked for him both in Washington before the war and in the Phoenix area after. We built custom homes. I can do everything on a home from the ground up. Framing, sheet rock, tile, stucco, plumbing. You name it.”
The company did well and even survived the great recession but what it couldn’t survive was the death of his Father. “He died seven years ago and my brothers didn’t want to keep the business going, so they sold all the equipment.”
Shortly after that Allen found himself on the streets for the first time. And once on the street he learned a hard truth. You are under a lot more scrutiny of the law once you are homeless. He had smoked marijuana for many years. “It keeps me calm when I have episodes about the war.” Smoking, buying and using pot had never really been an issue for him, but once on the streets he began to have run ins with police and they found the pot. Soon he was cycling in and out of jail. It was the same pattern, they would let him out, he’d search for work and every decent prospect would find out about his record and it would fall through, he’d sleep on the streets and at some point they’d catch him with pot again and he’d be back to jail. “They follow me around and tell stores that I am going to steal from them. I have never once stolen anything in this town, but the police feel the need to tell people I do. The only charge I have ever had is for marijuana.”
“I refuse to steal, can’t find work and have to eat, so I sit on the corner with my sign.”
This pattern allows him to survive, barely. “I usually get $15 to $20 a day. It’s enough for food and I save a little so that I can go to the truck stop and shower for $11, at least once a week.”
Today you can see him on the outskirts of town far enough out into the dessert that temperatures might actually drop below 100 degrees in the Yuma nights. “I stay further out because I don’t really get along with people. I refuse to stay in the shelter because I am prone to get violent in my sleep. I don’t want to wake from a dream only to find I have hurt someone.”
I realize as I speak with Allen that twice I end up asking him the same question. “When did you get out?” First as I learn about his military service and again when I learn that he has been in jail. Funny, that we move from town to town, or leave one job to another but when it comes to the military and jail, we “get out.”

Generally, we use the term ‘get out’ to describe a situation we didn’t want to be in. War and prison would likely both qualify. Both are experiences most of us wish to never have, both are very different than most of the lives we live. They are hard, they can leave us wounded and scared. Sometimes the scars are physical, sometimes mental and sometimes they are scars on our record. Funny things about scars, they make people different, and we don’t always accept people who are different. What I realized about Allen is that he may have gotten out, but I’m not sure we are ready to let him back in.
Posted by Nathaniel Gee at 6:08 PM