Mom, Are you Homeless? 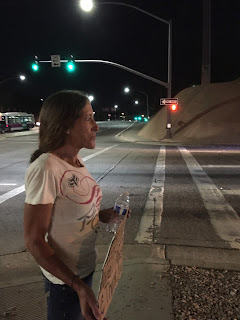 Mom, are you homeless?

1997 was a very difficult year for Stephanie. She had become a single mother upon the death of her husband and was left to raise three children, ages 9, 14, and 20. Despite her loss of a deep love, a love deep enough that she wears her wedding ring to this day, she hung on and held her little family together. Now, however, with her children 28, 33, and 39 all moved out and raising kids of their own, she has lost the strength to keep up. The necessity of keeping a roof over her children’s head helped her find a way but that’s changed. “Being alone now, it is just easier to find yourself on the streets.”

I met Stephanie on the corner with a sign asking for assistance. “I do have a job,” she said, clearly embarrassed in her current state. “It just gets slow at the convention center during the summer and I need some help to get by.” It becomes clear that slow is a kind way to say during the summer she has no work. Therefore, during this slow time, she often finds herself “between homes.”

“I have tried other jobs, but they always want me to put them first and I don’t want to give up my position at the convention center. After all, if I get 500 hours and pass my test, my salary goes up to $20 an hour. No one else will give me that kind of money.”

After mentioning her job, she notes, “The biggest fear I had when I started pan handling was that someone from work would recognize me. I even thought about getting a wig and sunglasses but didn’t feel that would be honest.”

“Do your children know you’re out here?” I ask.

“What would they do, if they knew?”

“They would want to help. Have me move in with them or something, but I don’t want to be a burden. They have their own children to raise.”

A lady stops, even though the light is green, and hands Stephanie a box with half a pizza. Stephanie grabs it and tries to thank the lady as the car quickly takes off in response to those honking behind.

“I am not proud of this, but am grateful that people are so kind to me. They often stop like this and get me food or a few dollars.”

“Where do you stay at night?”

“There is a place a few blocks away that is only $44 a night. Sometimes I get enough. I also have friends who will let me stay with them and shower if I have to go to work or have a job interview.”

I thank her for talking and begin to head back. As I walk, I think of this widow, mother of 3, grandmother of 8, and homeless women. Everyone wants so much for their children. We would do anything for them. A clear example is a widow mother, who in personal shame begs on a street, rather than accept a warm home to avoid inconveniencing her children.

But what of those who would do anything for us: our parents? How well do we reciprocate? I thought of her children. Do you think they know? Some of the signs must be obvious.  Do they notice that she only visits them; that she never talks about her home; that she shows up clearly having not bathed? Or are they so caught up in the business of the world that they don’t even notice? Or perhaps they notice but don’t have the courage to ask, “Mom, are you homeless?” Or maybe they know, but like so many, are not sure what to do.

I asked her, before I left, if I could take a photo for my blog.

I assured her my blog was not that well-read, so she agreed.

I was sincere when I told her I doubted her children would see. But I ask all of you who do. Where is the woman who raised you: the woman who, when the world pushed on her, held up, not only her share, but yours, so that you could enjoy the safety, security and love of childhood? Are we caring for them the way they cared for us? Most are not in need of a roof over their head, but they may need a phone call or a visit. Or maybe they need to feel needed: that there are people out there who still need their love and support, perhaps just as much as the day they lost their father.

To all the Stephanies of the world, especially the one who, when times were tough, kept a roof over my head physically, emotionally and in every other way, I say, “Thank you, and I love you.” 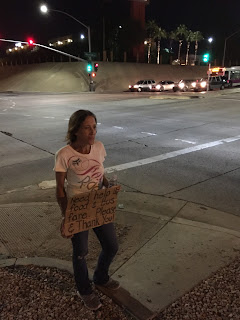