Are These Your Shoes? 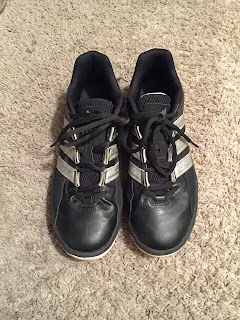 Are these your shoes?

Barely used 10 ½ black Adidas with silver striping? Perhaps you left them sitting out on a bench at your local locker room, carelessly left them on your front porch so no scuffs got on your carpet, or maybe took them off so you could let loose on the play place at McDonalds.  I met them sitting on top of a black roller bag. You know, the type that an executive would wheel through the airport as he rushed onto a plane. However, the style and age of the luggage was not complimentary to its owner but rather in contrast. It appeared to me as I approached this frail body in a ragged blazer topped by a bright blue Buffalo Bills cap at the Denver Union Train Station that its owner had seen much more mileage than his luggage or the shoes that sat on them.

“Are you coming or going?” I asked.

“Neither, I live here.” After a pause he anticipated my next question, about the bag. “I’m homeless.”
Jack has been on the streets in Denver for 15 of his 55 years. When asked what led to his homelessness he responds, “I came home early from work one day and found my wife in bed with my father.” It is unclear how this left him homeless but it is said in such a way as to not invite follow up questions.

It doesn’t take long for him to steer the conversation and he asks, “What size shoe do you wear?” The answer is not 10 ½ but it’s close enough. “Do you want to buy these?”

“Where did you get them?”

“You want the truth?” I nod. “I found them in a dumpster. Probably a mad girlfriend throwing her ex’s stuff out.”

We talk back and forth. Jack says the doctors tell him he has lymphoma. This has led to rapid weight loss and he produces a picture of himself with considerably more muscle, bone structure and everything else except for hair. The transformation has taken him from Mr. Clean to Mr. Burns.
“The health care is good though,” he explains. “If I need a doctor they let me see one and I can get any prescription I need filled for two bucks.”

Conversation continues as we head down into the bus station. At the bottom we approach a group huddled together on the floor talking and laughing. “This is Sunshine, Stella, Hollywood, and Daniel. The dog’s named Lucy.” Pointing to each member of the group and ending with the Pitbull sitting next to Sunshine. Sunshine is the first to accept the stranger or at least enough to talk. She’s from Tennessee and came to Colorado a few months ago.

“I love the mountains…and the lifestyle. It seems like everyone in Colorado lives a clean, healthy life style and I admire that.”

“You came for the legal pot.” Stella has joined in.

“That too.” Sunshine says laughing.

“What bus are you getting on?” A security guard has approached the group and is anxious for them to move on.  He continues his questioning to each one careful to try to catch them in a lie. “That doesn’t stop hear any more tonight,” or “that bus just left why didn’t you get on.” He pushes each person except myself, he doesn’t seem willing to ask or even make eye contact with me. After his pushing seems unable to make any in the group stand he simply says, “well you better be on the next bus or you’ll have to leave.” He walks away and the group visibly relaxes.

“Do you guys stay at a local shelter?”

“Not during the summer. It’s too nice outside. Plus, the shelter won’t let me stay with Lucy.”
“So do you usually just try to get enough to eat?”

“That and a shower. There’s a truck stop that will let us shower for $12 and wash some of our clothes.”

Jack looks at me, the smile gone, “five years? I’ll be gone in two months. Five years, I’ll be in heaven and I’m okay with that.”

Shortly after this exchange I have to leave and am half way out of the bus station when the shoes come to my mind. I turn around.

“Jack” I call out as I approach. “Maybe I will take those shoes.”

He smiles as I hand him some cash and he hands me the shoes.“God made you come back didn’t he?”

I think momentarily. “Yea, I suppose so.”

So, are they your shoes? If so and you are in the need of a new pair, I know a great place to pick some up. The atmosphere is like no other store I’ve ever been in and the sales staff know how to treat you. After all, it’s where I bought my favorite pair of shoes. 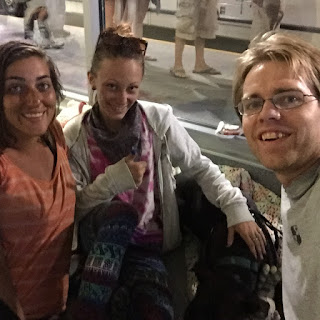 Sunshine, Stella, Lucy and Me.