Getting out of...or back in "the system"? 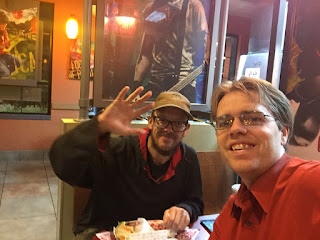 Rob and Me at Jack in the Box

Being a single Mom is never easy. There is never enough money, time, or energy to get done what needs to get done. “My son would be better off without me,” often went through her head and when he turned 16 years old she left and he became officially part of “the system”. He did “okay” in the new life but his mothers ability to cope did not improve and by the time he was 17 she had not only left his life, but had taken her own.

By 18 he had graduated and the state funded group home he was a part of helped him land a job as a seasonal fire fighter. While he was working, they also helped him find a room in a shared apartment. At 18 with a job and a place to live, the State of Oregon was able to declare victory and clear the books of one more successful candidate who had left, “the system.”

A few months later the seasonal fire job ended, however he was undeterred and quickly found a job at Taco Bell. It was less pay but with the roommate sharing the bills, it was enough to get by. With work and a place to rest, he could sleep peacefully. That is until one morning at 2 A.M., when someone burst through his bedroom door yelling at the top of his lungs. Half asleep and sure someone was breaking in to attack him, he grabbed a small wood post that he kept near his bed, swung with all his might and heard a mighty crack that knocked the intruder both on his back and out. Fumbling in the dark, he turned on the light and saw his drunk, unconscious roommate lying on the floor in a pool of blood.

Rob grabbed some of his clothes as his roommate began to regain consciousness, within a few seconds Rob heard the return of the yelling, only louder and he was glad to be half way out the door before his roommate fully grasped what had occurred. The next morning, he returned to get the rest of his things. The bruised roommate apologized and asked Rob to stay. “I could have killed you.” Rob replied, “There is no way I am staying.”

A friend let him put his things in his garage, but after a few weeks of couch surfing, at the young age of 19 he spent the first nights of many on the streets. Taco Bell was enough to pay a portion of a room but not enough to get his own place, especially not when it required a deposit. A few weeks after being on the street he lost his job. “That first winter I would have froze, if it wasn’t for the truck stop. They’d let me stay inside. I get enough change for coffee and they would give me left overs and stuff. I had never tried coffee and by the end of the first winter I had lived off so much coffee that I vowed never to have it again. To this day the smell makes me sick.”

“I’d get a job for a while, get a place to live, loose the job, get a few months behind and by the time I found another job I would be back on the streets. That’s kind of the cycle I have lived for the last 22 years. Now at 41, I kind of found it easier just to embrace it.”

Running down the list of jobs he mentions a lot one might expect, waiter, construction worker, harvester, but building computers stands out.

“Yea, I built PC’s in Washington for a while. That’s what got me into gaming.” He gets very animated as he shows me his favorite game he plays on his phone. He is clearly very into it and by the sound of it plays most of the day. It’s a war, medieval, build castles, grow wheat, raid the neighboring village type game. He speaks of his guild mates, those he plays online with, as his family. “They are great, I look out for them, and they do the same for me. I have time to build up gold and food and I often give it out. They are very appreciative.” The symbolism of this last point is hard to miss.

“How do you afford the cell phone?” I ask. Oh, I have WIFI and power at 3 or 4 locations in town. I can always hang out at the library or here outside.” He was sitting with his cell phone plugged into an outside wall socket at Jack in the Box, when I first met him.

“I get food stamps that I reapply for every 3 months. If I get sick the ER will see me.”

I am not sure now to ask the next question but fell compelled. “Do you have a plan to get off the streets or have you accepted it just part of your life?”

“I have narcolepsy, but since I’ve never injured myself it’s considered stage I. At some point I’ll fall asleep, hit my head, go to the ER, and get declared to be in Stage II, then I can get social security and finally have a steady paycheck and get off the streets.”

I was struck by the fact that, “the system” took a child abandoned at 16 who’s mother killed herself a year later, helped him get a job and room at 18 and then took him off the books, declared him prepared to live on his own. Now 23 years later the only path he sees to get off the streets is to once again through “the system”.

No one wants people to have to be on lifelong welfare. Everyone hopes people can get out of “the system,” and be on their own. But perhaps Oregon’s victory was premature? If you had Robs background would you have been ready to be on your own? Was a seasonal job and a roommate a recipe for success? Do our welfare programs at times simply shift the problem? Or hope to simply check a box next to someone’s name so they can be called rehabilitated?

Do we personally at times do the same to those who have been placed in our life, who truly need us the most?

Posted by Nathaniel Gee at 9:32 PM

Email ThisBlogThis!Share to TwitterShare to FacebookShare to Pinterest
Labels: Homeless