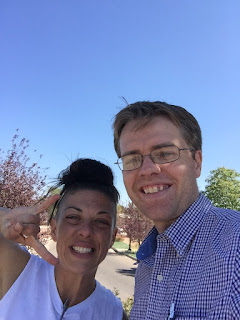 Jennifer and Myself in Denver

Jennifer was only 12 years old when she first found herself living on the streets. Mom demanded she attend school and she just wanted to goof off. "Most nights, I would find someone’s couch to crash on," she remembers. By 13, she was into drugs and in and out of juvenile detention. At 19, she was pregnant, and she gave birth prematurely to a boy who came out heavily addicted to alcohol and drugs. Not surprisingly, the state took the child. But finding foster care for such a high needs infant can be difficult (see my post on Doug Broadbent).

The state was lucky. A nurse with all the right background and knowledge had recently decided to foster. This would be her first and last foster child because after 6 months they were sick of being foster parents and simply wanted to be parents. The couple approached Jennifer and asked that she give up any rights to the child to allow them to adopt. While it was hard, she agreed, "They were going to give him a much better chance at life than I was prepared to give."

Since the birth, her personal life had not improved. Drugs still ruled her every action, and shortly after the adoption was finalized she again found herself in jail. However jail proved exactly what she needed. She went straight from jail to a rehabilitation facility. She was released at age 22 and that is when she began to get her life back. After acquiring her GED, she entered school at University of Colorado Denver to work on a Political Science degree. She married, got a job as a waitress, and most importantly, stayed sober. As she neared graduation she began to feel maybe Political Science was a mistake and took side classes to get a certificate as a paralegal. As she neared graduation she began an internship in her new field.

Then it happened. It had been 7 years of sobriety, but avoiding drugs doesn't guarantee an easy life. Her marriage was hurting and it ended in an ugly divorce. "After the divorce, I felt like a failure and just lost all my motivation." She lost her internship, dropped out of school and returned to drugs, streets and crime. That was five years ago.

I saw her near a Wal-Mart holding a sign that said, “Trying to pick myself up by going lower." When asked to explain, she said that she was trying to get a job as a sign flipper which many considered low, but any job would be higher for her. She said she was guilty of anything to get the drugs, but had finally decided that stealing and prostitution weren't worth it and that she had stopped those. She recounted how even begging was a step up from those.

As I thought of the lessons I learned from Jennifer, I thought of Oswaldo, another person dragged into a life of addiction at a young age. I also thought of how hard it would be to give up your only son. Even though the state had taken the child, if she hadn’t given up rights, he could be bouncing around in our legal system from foster home to foster home to this day. She did exactly what someone who loves their child should do, give him the best chance for happiness in a home with a loving father and mother. She said it better than I could: "I am proud of myself for giving him up, no matter how hard it was, and I'm grateful for the great parents who are raising him."

But the other thing I can't get out of my mind is the night 5 years ago when she felt so empty. When the failure of her marriage made her feel a failure at life to the point that she was ready to reenter the hell of addiction she had left seven years before. Why couldn't someone have been there to take her to dinner that night? To help her see how far she had come and how much she had to keep fighting for? If she had not slipped back into the darkness of her past that night, where might she be today?

Who around us is struggling today? Who is about to fall? Those in the depths of despair won't usually call out for help. Rather, we need to be in touch with their needs and call them up, seek them out, and rescue them before they surrender to whatever hell is closing in.

I wasn't there for Jennifer that day, but who can I be there for today?


If you liked this check out my last Homeless post: Devastating Debt
Posted by Nathaniel Gee at 10:29 PM