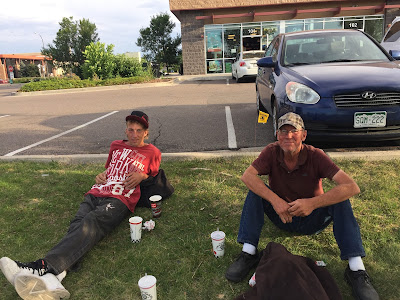 Tom and Keith-Tom is the older gentleman

Deciding on dinner when I’m out of town and alone can be tough. I get tired of fast food, and sitting alone in a sit-down restaurant is not my style. Once, while in Denver with my family, we all went to Casa Bonita, a restaurant full of interesting scenery and a big waterfall that performers dive into while patrons eat. I drove over to the restaurant, thinking I might go again, but I couldn’t bring myself to walk in alone. I begin walking down the street.

Colfax Street was likely at one time a nice road, but now it’s rundown and flanked with smoke shops, pawnshops, and tattoo and massage parlors. A few blocks down, Walmart has built up a very nice shopping center with a dry riverbed and bridge, set back a little from the road.
This is clearly a popular place for the homeless to gather. I approach two men and start a conversation. Keith came from Pennsylvania (an interview from earlier)

Tom is older and has been in Denver since 1985. He grew up in Helena, Montana, the youngest of 8 kids. He has lost track of all of his siblings. He heard that one of his brothers, who had been a Catholic Priest in San Francisco, had died of AIDS, but he didn’t find out about it until several years later.

In 1978, Tom graduated from high school and worked in Helena for 7 years. Then in 1985, he decided to come out to Denver for an ACDC concert. He never went back. “I loved the weather, the mountains, and the atmosphere, so I decided to stay. Shortly after that, I fell in love, got married, and had a daughter.”

“What did you do for a living?”

“Heating and cooling mechanic. I even went to school at Metro Tech for drafting, but that didn’t work out.”

“You ever see your kid?”

“I haven’t seen my daughter in 5 years. She’s 30 now and lives in Denver, or at least she did last time I saw her. See, when she was 8, I came home from work one day, and everything was gone—my wife, my daughter, and the furniture. I took 3 weeks off work to look for them. Turns out she had run off with her ex-husband. She took my daughter, and her stepdad raised her as her father. She even took his name.”

Tom is surprisingly void of emotion as he tells this tragic story. He shows no bitterness towards his ex-wife or this man who replaced him in his family. It is not clear if time has healed his wounds or if he really feels this was best situation for his daughter anyway.

I’d seen such family breakups be the catalyst for homelessness, so I ask, “Is that when you became homeless?”

“No, I went back to work and did okay for another 10 years or so. Shortly after my wife left, in 1991, I bought a home. It was a nice 3-bed, 2-bath home, and the payment was only $450. But I took out several home equity loans, and my payment became over $900, so I sold it so it wouldn’t get foreclosed on. That is when I found myself on the streets.”

We talked for over an hour as we ate a sandwich from Jimmy John’s. Keith and Tom told me how they avoided downtown because of crime, how they remove “no smoking” signs at bus stops, and how it’s only safe to gather in groups of less than 4 and not on the Wal-Mart side of the channel.
Homelessness is almost never to be blamed on a single cause it’s usually multi-faceted a broken home, addiction, mental illness, adventure, etc. But sometimes you can see a primary cause, and for Tom, it was debt. As Tom spoke, I could see and how crushing debt can be, and I felt deeply grateful for my parents and church leaders who regularly spoke out about the negative impact of debt.

His story also led me to ask myself, Do we make getting debt too easy? Do we do enough to discourage debt? Would the financial advisers call the loans Tom had taken out and that eventually put him on the streets, ‘good debt’?


As noted above, choosing where to eat when out of town can be difficult. If I had chosen to eat alone, I could have had a much nicer meal for what I spent that night, but I am certain it wouldn’t have been nearly as enjoyable or satisfying.
Posted by Nathaniel Gee at 6:28 PM