How many ways is he Homeless? 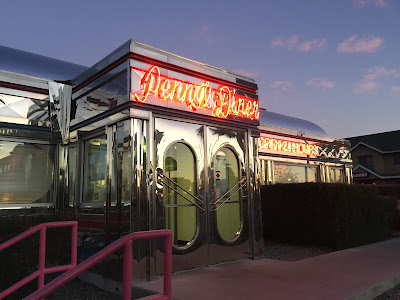 Small Diner where I enjoyed dinner with Mike

Twelve years ago an extremely intoxicated man walked out of a shell gas station with a 30 pack of beer, knocking a young German girl on her back. It’s hard to find a better beginning to a love story than that, but thus began what would become, Mike and Angel.


A month later the two decided to elope against their parent’s wishes. They were married for 12 years when Angel was diagnosed with cancer, and a few months later died. Mike decided to deal with his grief in an unusual way. Packing up a few pairs of clothes, a mat, and a sleeping bag in a travel pack he began to walk. At the time, he was in Maine and decided to walk from Maine to Florida, onto California, up to Washington, and then back to Maine.


“Why?” was the obvious question, when he told me his plan.


“I didn’t know how else to cope and because people kept sayin’ I couldn’t do it.”


I met him in Yuma, approximately two months after his departure. He was out asking people for cigarettes. He was clearly hungry and we headed for a place to eat, finding a great looking diner.
After ordering a Reuben, just like Carlos (my friend with the serpentine stone), we continued our conversation.


“So you mostly hitchhike and walk?” I asked.


“What was the longest ride you’ve had?”


“From Texas to Arizona. It was this real nice lady trucker.”


“Most rides from truckers?”


“Yea, just go to truck stops and tell them your next destination.”


“Any cool stories on your journey?”


“Nah, not really. I did walk 26 miles out of Tucson, when an officer picked me up for walking on the highway and drove me back to Tucson. So I started again, and got by him the second time. Officers really bug me. They call me a druggy and I say give me a cup and I’ll pee in it. They always back down. My only addictions are cigarettes and coffee, I don’t know why they think they can just assume I do drugs.”


“Do you prefer certain type of place, like a park?”


“No, I avoid parks. That’s the first place the cops look.”


“Have you lost weight?”


Perhaps we could market this as a hot new weight loss program. We take all your money and Identification, put you on the streets and pick you up in a few months.


“No, my parents disowned me when I married, and I’m an only child.”


“Do you ever travel with a dog or companion?”


“No, it’s hard enough to take care of myself.”


“What will you do when you get back to Maine?”


“No, I grew up in Ohio but moved around a lot. I’ve always had trust issues so don’t stay somewhere very long.”


Of all the things Mike said this struck me the hardest. For one thing his trust issues were obvious. Rarely did he make eye contact or look in my direction, and the fact that his trust issues led to frequent moves really made me think. Mike made me realize that there are several ways to be homeless. There are those with no roof over their heads, as we usually think of with homeless. But what other types of home are there? Our home town, is a home for so many of us. Lori was homeless because she had no roof but she referred to Colorado Springs as home. Raymond too was out in the cold, but Ventura was his home.


Lastly home is even more than a town or building, but as the throw pillow on your grandma’s couch says, “Home is where the heart is.” This is perhaps the most important and powerful definition of home. And those I have called homeless, most are not homeless when it comes to this definition. Most had those around them they cared for, even if it was an animal, and in that love they had, in perhaps the most important way, some home. What was so sad to me was that in every way Mike was homeless. He had no house, no home town and no one or nowhere to place his heart.


I have always wanted to be some rich guy who could say, “My summer home.” Because anyone with two homes qualifies as, some rich guy. As I thought of Mike, I became very grateful for the many people who make me rich, rich with homes where my heart is.
Posted by Nathaniel Gee at 4:57 PM