The fifteen of us left the hotel walking towards downtown Fort Collins. We had spent the day together on Colorado State University (CSU) campus planning for an upcoming conference. Except for the wind, the weather was nice. Still, several of my kind, newly found friends, most of them I had met that day, offered me a jacket. It was still warm and I hated to inconvenience them for my error of having left my own on the plane. They wisely predicted that the wind would bring in cold and possibly snow, but I stayed firm.

We reached the vibrant downtown, found a sports bar, and ordered some appetizers. The Sweet 16 had started and one of my colleagues was anxious to cheer on his Alma Mater. After watching a little basketball, not feeling overly social, I decided it was time for me to see if Fort Collins had many homeless. Excusing myself, I headed towards what has been deemed hobo park. Due to some construction, hobo park really isn't a park anymore. The lot was sold and a restaurant is being built in its place. This has pushed the homeless further into the downtown area causing no shortage of stir in the local community.

I pass a beautiful old building with no roof and supported walls. 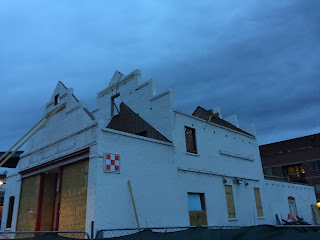 Clearly the town is willing to put up considerable money to preserve some of its history. Across from this is the Fort Collins Rescue Mission, a small building that I would find out later never has enough beds to meet demand. Several groups of homeless men sit around and joke outside waiting for the shelter to open its doors. Across the street, under a blanket next to a shopping cart, sits a huddled mound. 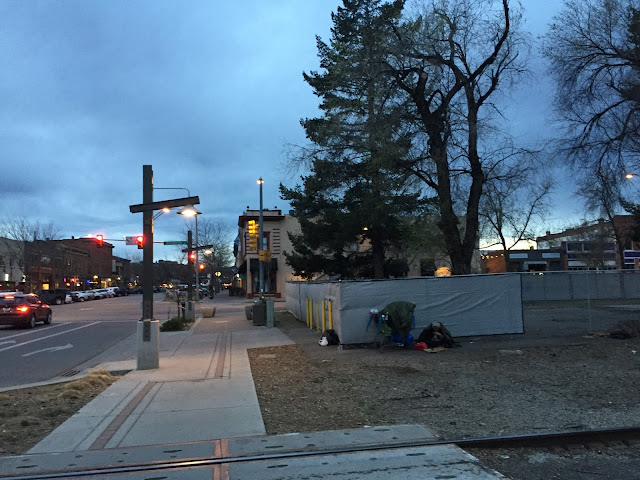 I cross and as I walk by an elderly women peers from under the blanket and asks if I have some change. I sit next to her and ask if she has time to talk.

Lori grew up in Fort Collins, got married, and a few short years later, got divorced. After the divorce, she found herself with too little to get by and was on the streets. At the time, Fort Collins had little support for the homeless, and it was too cold, so she went to San Francisco.  For the next 32 years she would be on the streets there. Those years had taken their toll, and as she spoke, she smoked a cigarette between the partial remains of the only two teeth she had left.

"After a while, I just had to come home. This is my home." This reminded me of what I learned about what we call home when I met Mike.

"Can I take a picture with you?" She said she'd rather not. She has a brother she hasn't seen in years who might still live close by. She'd love to see him, but doesn't want him to see her homeless. I am sorry not to have her picture, never have I seen a women more closely resemble a Walt Disney portrayal of an elderly witch and yet underneath you could see beauty coming through. I find it hard to describe and regret I could not get her photo.

I said goodbye, and she politely tells me to have a nice day as she wraps her blanket more tightly around her. My colleagues weather forecasts appear to be accurate.

My walking was rather aimless as I continued downtown. You may think that finding and speaking to homeless people would be easy, but it has proven more challenging than I ever expected. They are often in groups, and unless one of them introduces me to the group, I do not feel welcome. Not regularly having people want to speak to them, they are justifiably suspicious of me and don't desire to talk. And sometimes I just loose my nerve. Most embarrassingly, I will admit I often avoid those that appear to have mental illness. Why? I don't know what to say or how to approach them, and I fear I will only embarrass them and myself.

It was this exact fear that kept me avoiding a man now. He was at a park bench that sat on a corner of the street, sorting clothes, lots of clothes, bags and bags of them. I don't know why but I assumed he had mental illness and moved on. 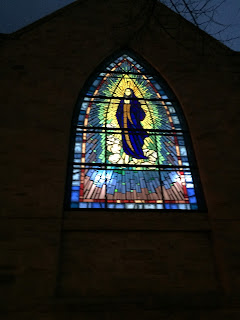 Focusing on enjoying them was difficult as my mind could not ignore the dropping temperature, and I decided to start back toward the hotel. Again I passed by the gentleman with all the clothes. I was about to leave when I remembered an article my Mother-in-law had sent me. It was about a woman in Texas who helped a homeless man with mental illness. It was beautiful story.  This thought made me realize it would be worthwhile to approach this man, mental illness or not.

Nervously I walked up to the bench, he was kneeling behind it still sorting clothes.

He looked up smiled and said, "Hello."

"How are you?" I continued.

"Good, How are you?" My nervousness had me repeating my introductory question. He looked at me as if I might be the one with the mental ailment. I tried to move beyond my blunder.

"Can I speak with you?" I said taking a seat on the concrete next to him.

From that moment I had an amazing time getting to know Colonel Stephen Wildgen.

The man had some amazing stories. 32 years of his life were in the army, flying helicopters in Vietnam and elsewhere. At one point he told me about the time he was part of team that flew through in Columbia as a diversion why the military took down Escabar.  He was an MD that had classes in electrical engineering and spent a time as a stage magician. His current project is writing a book with professor, Franciso Leal, on a book titled "Signs of the Times" about the homeless. It took rummaging through several of his bags, but he was able to find an article that CSU had published about homeless issues that had a photo of him in the snow protesting some of the new laws related to the homeless. The fact that it was shredded and barely legible did not lesson his pride in the article. 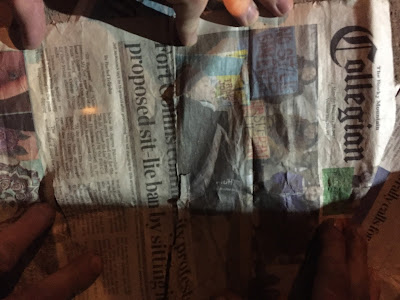 Curiosity led me to ask about the bags and bags of clothes.

"I get some from Catholic Charities and others people bring to me to pass out among the homeless. I get blankets, jackets, clothes, sleeping bags, you name it."

The streets are his home for weeks at a time, then he goes to his home which is in a nearby town. He noted his military retirement is more than sufficient for himself to live on.

"A few years back I lost my last child. I had three children, two adopted and one biological. Two died in car crashes and one from kidney failure, all in their forties. After that, I realized I was the last Wildgen around and decided I needed something to do."

We cross the street and get some hot chocolate."Don't worry about my stuff no one touches it. The police all know me around here and will keep it safe." He continues, "I did lose my kids, but some of the men who served under me are my children. Particularly those that I lost. I remember all the men who died beside me. I remember them and their families. I still get cards from some of their families and those who survived to this day."

After getting our drink we head back to the bench. "I have lots of stories after my oversees missions but I only tell the funny ones. Let me tell you about stealing the admirals beef." His eyes lighten up and he laughs with the thought of the story. "We had been stuck on Vietnam for days with orders to remain put. We had copters but were told to wait. Mangoes were everywhere, and we were all sick of them and only ate them because they beat our rations. I knew the aircraft carrier sitting out in the bay had a great cafeteria full of food. Finally I was sick of it, I took the copter and went out to the carrier. When I landed the marines were busy loading rockets and ammo so they wouldn't let me board. So I was stuck on the deck. While sitting on the deck I saw a box that sounded like it had a compressor inside. I opened it up and it was a freezer."

He continued to explain that inside of the freezer were two larges slabs of beef. By removing some ammo boxes from his helicopter, he made room for the beef, then put the ammo in the freezer so it wouldn't be sitting on the deck and headed back to camp. Once he landed, he and his men used chain saws to cut up the beef and began to cook them in some 55 gallon drums they had.

A short time later an Admiral landed, all dressed in white. The Colonel continues his story, "He had more egg splattered on his hat then I'd ever seen. So I stood as best as I could at attention."

"Did you take the beef?"

"Do you mind if we search your copter?"

They left, frustrated, having not found the beef. His commanding officer came to him once the Admiral left and asked, "Where's my share?"

This story later got written up in Stars and Stripes.

By now it was getting late and dark and I needed to get home. By this time I was freezing. He asked if I wanted a shirt or a jacket. I ended up with a lovely Estes Park sweatshirt and walked home feeling very warm. 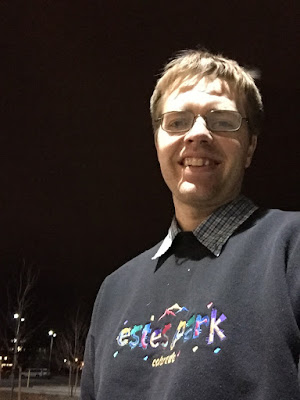