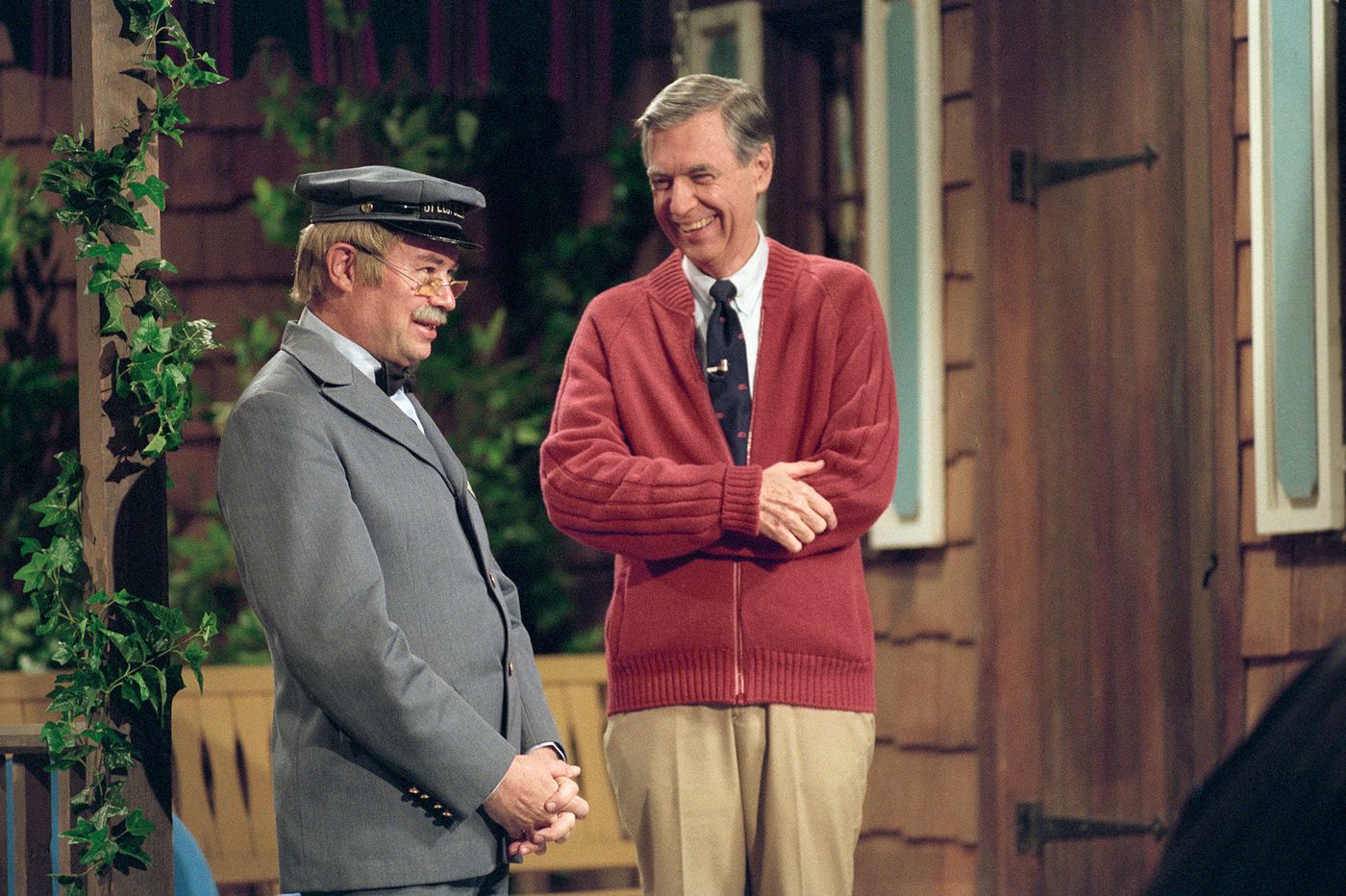 Fred Rogers, doing what he always did, smiling, listening and being present.

When we hear that a member of congress has voted present we often mark it as cowardness. Likewise, we have a tendency to call those who show up only physically retired in place. For valid reasons we disparage the idea of being physically present but in every other way are absent.

Mister Rogers who physically has been absent from this earth for 13 years is making his presence very much known. This has come as books, documentaries and popular films have all been produced about his life. Rogers didn’t mean much to me as a child. I mean, I enjoyed his program like I enjoyed almost anything on TV. True, it probably was more beneficial watching Mr. Rogers talk about how to get through a tough day instead of witnessing one by seeing an affair and murder come to light on days of our lives on the other station. But can I say I always looked forward to Mr. Rogers? Or remember a hard time in my life when I needed to think of Daniel Tiger to get me through it? No.

However, I have watched both, Beautiful Day in the Neighborhood with Tom Hanks and the documentary on Fred Rogers life, Won’t you be my Neighbor, as well as begun reading The Good Neighbor and I can say Fred Rogers is having a profound impact on my adult life.

In April 1967, Misterogers Neibhorhood, (They changed the name to Mister Rogers Neighborhood later). The show had been on the air for a year and they decided to do a meet-the host event in Boston. They knew Rogers was popular and planned for 500. Over 5,000 showed up, the line wrapped around the studio and down the street to Soldiers field. But despite the crowd Rogers insisted that he kneel and speak with each child individually.

The thing that stands out to me as I read about Fred Rogers is he had learned how to be present. Wherever he was, whomever he was with, once he chose to be there he was fully there. His eyes were there, his ears were there, his mind was there, and his spirit was there. The rest of the world became non-existent.

With this skill came a peace that he carried with him continually. A peace that is increasingly rare as this skill is becoming lost to the world. Our cell phones allow us the opportunity to remove ourselves from where we are at any second and put portions of ourselves somewhere else. Being distant while present, half engaged and half aware has become a way of life, a part of who we are. We rush from one place to another, always late, always in a hurry and then get there only to be more focused on the next appointment than the task at hand.

You want to have a great marriage? Be fully present when you are with your spouse. You want to be a great parent? Don’t have a phone in your hand, or work on your mind when you listen to your children tell about their day. Want to be more successful at work? Be fully there when you are there. Don’t have your mind worried about Donald Trump, your favorite sports team, black lives matter, or what you are going to have for lunch.

You want to be a person who has great character and understands why they are on earth? Be there for yourself and your God. Too often when we find ourselves with even a second of silence, or boredom we quickly reach for the phone and see what in the news, on facebook, the stock market or the number of coronavirus cases. Because in not being able to be fully present with others, we are losing the ability to be fully present with ourselves. Moments that should be for reflection, prayer and self improvement, when we give ourselves and our God our full attention, when we process what we did right and what we did wrong are handed over to a screen to see an acquaintance's views on politics, or pictures of what someone else ate for dinner.

Paul gave a wonderful analogy about the importance of us as members of the Church to work together. That we are all part of the body of Christ. He said, “For the body is not one member but many. If the foot shall say, Because I am not the hand, I am not of the body; is it therefore not of the body? And if the ear shall say, Because I am not the eye, I am not of the body; … If the whole body were an eye, where were the hearing? If the whole were hearing, where were the smelling? But now hath God set the member every one them in the body as it hath pleased them?” (1 Corithians 12: 14-18)

Paul used this analogy because the idea of walking out the door without our ears was so ridiculous, but that is exactly what so many are doing every day. It’s driving with headphones on and reading a text. We try to listen to meetings while our eyes look at something else, and our brain does a third thing.

Christ well understood our tendency to disengage. He taught in parables in part because he knew that to understand them would only be accomplished by those who choose to engage, to be fully present. He said, “For this people’s heart is waxed gross, and their ears are dull of hearing, and their eyes they have closed; lest at any time they should see with their eyes, and hear with their ears, and should understand with their heart, and should be converted, and I should heal them.” (Matthew 13:15)

But? You say, “I have too much to do. I have to check emails while in meetings, I have to check facebook before I sleep, I have to be reading work assignments at the dinner table.” We all feel too busy to slow down. That we have too much. That if we give our wife or kids our full selves then we will get behind on our work or be passed up for that next promotion.

That is why Mr. Rogers is so important for me today. Did he, giving his full attention to each child, taking time to be present with whatever one he was with, limit his ability to achieve? His ability to influence? His success? No, the Lord magnified him in incredible ways that are still influencing people like myself over a decade after he is gone.

But as I think about Mr. Rogers I realize why he is having so much impact on the world. It’s because he is a reflection of someone who had this exact same skill. A man who could be fully present when he ran into a total stranger getting water at a well. Who gave his full attention and energy when he ran into lowly fishermen. A man who while only living into his early thirties continues to have a larger impact on earth than any other man. A young man from Galilee who we would all do well to find time to be fully present with.

If you liked this article please consider subscribing to my blog by entering your email below. Why subscribe? You get emails when I write articles and it really helps me. When I go to publish books or articles my number of subscribers is a big deal, so taking the time to subscribe means alot to me.

Posted by Nathaniel Gee at 3:10 PM