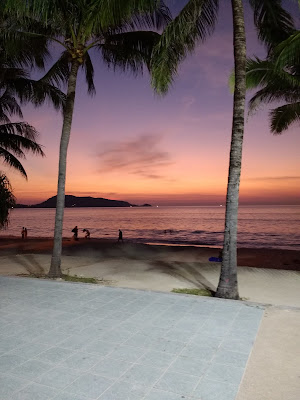 I never expected to be laying on the floor trying to sleep in a hot room with no air conditioning between a bunch of immigrants from Cambodia, but there I was, and of all the things I did in that beautiful beach town, it was the most memorable.

Early that day I walked through glimmering walking streets with neon lights everywhere, I visited the huge shopping malls with their beautiful and elaborate displays, I waded in the warm ocean water, and I sat in the shade of a palm tree reading the entirety of The Alchemist while someone brought me fresh coconut water until the sun slowly set over the ocean waters into a beautiful evening. It had been the definition of picturesque, the type of day that would be written about in travel logs and put in advertisements for tourism and hotels. Yet it was not the most interesting, or most treasured part of my short trip to the Thai beach town. That would come later, when I planned to be far away from there.
I planned to stay only few days, and the few days were up. What is more, I only had money for a few days. I had been in Thailand some time and no longer had a bank card, or anyway to get money. My only option was the cash I carried. I was running low, but I was not worried. I just needed the 500 bhat or so for a bust ticket and I would be gone back to my home in the north-east of Thailand. That is how travel had always worked for me before, but not this time.

“Mae Sot” I said to the lady at the counter, “Full” she replied, and pointed me to another bus company. I went there and got the same response. After exhausting every bus company in the city I realized I was not getting home that day. I went through a lot of crazy stuff in Thailand, but this is the first time where I felt genuinely panicked. I had not realized is that it was a holiday weekend and everyone was headed back home. Every bus was full. I was stranded.